The United States-Mexico-Canada Agreement, the Trump Administration’s replacement for NAFTA, looks to become a reality soon, as the U.S. Senate is expected to debate — and ultimately pass — the trade bill as early as January 16.

For the bill to go on to the next stage, the Senate needs to approve the bill, as did the U.S. House of Representatives in December. Senate Majority Leader Mitch McConnell expects the bill to get substantial bipartisan approval before the impeachment trial of Donald Trump begins later in January.

“We are, it looks like, going to be able to process the USMCA here in the Senate this week,” McConnell told news organizations earlier in the week. “That’ll be good news for the Senate and for the country, and something I think we have broad bipartisan agreement on.”

The timing of the trial on whether to convict Trump and remove him from office had raised questions about the timing of bill debate in the Senate. Impeachment takes precedence over other Senate business. The House voted January 15 to send the articles of impeachment it passed in December to the Senate.

The United States, Mexico and Canada first announced an the USMCA agreement 14 months ago. Some provisions of the bill raised concerns in Congress, particularly among Democrats. Democratic leaders worked with the Trump administration for more than a year to strengthen the deal’s mechanisms for enforcing labor and environmental standards.

Senators have a total of 20 hours to be divided equally between both parties to debate the deal under the trade promotion authority legislation. However, it’s unlikely that lawmakers will take up the full allotted time. Once the Senate passes USMCA, the deal will be sent to Trump’s desk for his signature. Trump said Wednesday he will sign the deal next week. But the deal will not be completely active until ratified by Canada’s Parliament. Mexico has already passed the revised deal, and Canada is expected to hold a vote in the House of Commons once it reconvenes in late January.

“All eyes will be on Canada to get the job done quickly so we can all work together to implement this agreement,” Senate Finance Chairman Chuck Grassley said on the Senate floor.

After agreeing in December to suspend a new round of tariffs they had planned to impose on each other December 15, the United States and China have been moving closer to ending a prolonged trade dispute. The suspension of the December tariffs brought some much-need relief to economic sectors in  in both countries, particularly the manufacturing and chemical industries, which had borne the brunt of the trade war.

Further, on January 15, the United States and China signed “Phase One” of a trade deal designed to de-escalate the two-year trade war. The National Council of Textile Organizations (NCTO), released a statement of cautious optimism after the deal was signed. “While we are still studying the details of the deal signed today, we applaud the administration for finally pressing China for a more rational and equal trade relationship,” said NCTO President and CEO Kim Glas. “Our industry has been severely damaged by China’s predatory practices over the past 30 years and we are anxious to see a new era of sound trade principles and balanced trade.

“At the same time, we question the last-in, first-out approach to the tariff reductions.  In our sector, this means that the penalty 301 tariffs on finished apparel and sewn products — the areas where tariffs have the most potential to effect reforms in China while bolstering the Western Hemisphere supply chain —  are cut in half while U.S. manufacturers continue to face full tariffs on certain inputs and equipment not available domestically.”

The National Retail Federation also released a statement in support of the agreement. “NRF strongly supports the administration’s efforts to address China’s unfair trading practices but we hope this is the first step toward eliminating all of the tariffs imposed over the past two years,” NRF President and CEO Matthew Shay said. “The trade war won’t be over until all of these tariffs are gone. We are glad to see the phase one deal signed, and resolution of phase two can’t come soon enough.”

Shay was on hand as President Trump and Chinese Vice Premier Liu He signed the agreement at the White House. As part of the deal, the United States will cut in half 15 percent tariffs imposed on a wide range of consumer goods imposed in September and canceled another round that was set to take effect in December, but others remain in effect. More details will be reported by Yarn Market once they become available. 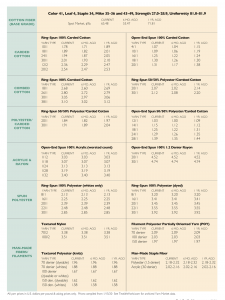