A rise of 85,000 tonnes in the Indian production number was more than offset by decreases for
China, Australia and others.

The global consumption figure for 2013-14 was reduced by 30,000 tonnes. This was attributable
to a reduction in India, mitigated only partially by improved prospects for the United States and
Vietnam.

A retrospective adjustment was made to Indian production in the 2012-13 season, resulting in
an increase of 252,000 tonnes to the world production umber, and therefore larger carryover into
the current season. 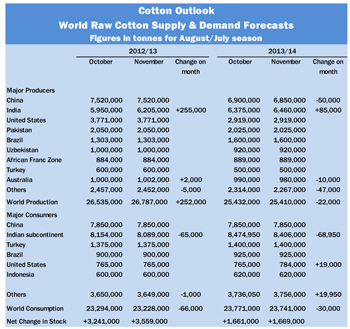 Click
here to
view a larger version of the table in a new window.