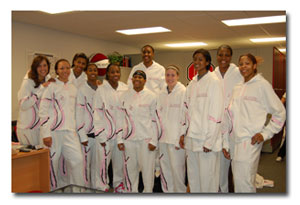 The North Carolina State University (NCSU) College of Textiles, Raleigh, N.C.,
lent its talents to the furtherance of breast cancer research by spearheading a project to design
and manufacture pink-themed warm-up suits for NCSU’s Third Annual Hoops for Hope Breast Cancer
Awareness basketball game earlier this month, pitting the University’s Lady Wolfpack against the
women’s team from Boston College. The game, one of hundreds played around the country as part of
the Women’s Basketball Coaches Association’s (WBCA’s) “Think Pink” cancer-awareness campaign, is in
part a celebration of NCSU Women’s Basketball Coach Kay Yow, who is living with the disease.

“The College of Textiles at NC State is proud to be involved in a game that raises awareness
of breast cancer and celebrates the lives of survivors.,” said Blanton Godfrey, dean of the
college. “Kay Yow is a symbol of NC State, the State of North Carolina and the nation; and to be
able to be a part of an event to raise money and awareness of this disease is quite an honor.”