T
he euro is the new currency that fuels economic growth by making it as easy to do
business across Europe’s national borders as it is across the United States. Thus, it provides a
sales and marketing tool the likes of which has never been seen before, whether selling, buying or
investing.

To understand the euro you must know some basics about its history, how it works and why.
Armed with this knowledge it will be easy for your company to take advantage of it in Europe.
Dealing in euros as the medium of exchange makes doing business easier and convenient because the
euro places you in a fair, if not favorable competitive position against your U.S. and foreign
competitors.


What Is The Euro?

The euro arrived January 1, 1999. To
date, 11 of the 15 European Union (EU) countries have joined the European Monetary Union (EMU).

In Cuba’s case, however, the reason is unusual. Since the U.S. embargo, much of the business
Cuba did with the United States shifted to Europe, so it makes sense for Cuba to be euro
denominated.

Bank’s foreign currency operating expenses will be cut about 90 percent in 2002, and for
companies who deal in EMU currencies, they can reap all the benefits now.


How The Euro Works

Until 1999, hidden in the exchange
rate and fees were premiums of 3 to 8 percent. However, by 2003 there will be one conversion fee in
the EMU.

The euro works because each of its members’ currency exchange rates are fixed permanently to
the currencies of all the other members. Even though the EMU comprises 11 of the 15 EU nations
fixed currency values are the mechanism that allows the euro to be traded across EMU borders with
no change in value. Therefore, there is a zero exchange rate risk when dealing across EMU
borders.

In 1998 the EU took certain steps so
that the Czech Republic, Hungary and Poland might be accepted into the Union within a few years.

In 1999, the EMU enacted a capped annual budget of $92 billian through 2006. Therefore, if
any or all of these states are admitted to the EU knowing their EMU membership costs in advance
helps them prepare to meet the EMU criteria.

In early 1998, both Denmark’s and Sweden’s publics, by small margins, voted against joining
the EMU. But a 9.5-mile tunnel, overland rail and vehicle bridge which connects the two markets was
almost finished. Sweden, whose economy is much larger than Denmark’s, would, for the first time,
have easy access to Europe’s mainland and its markets. Today the majority of voters in both
countries appear to have swung in favor of the EMU, and the consensus is that they will join the
EMU by 2003 latest.

In spring 1999, England announced it would probably join the EMUby 2002 (after their
national elections).

By September 1999, British Foreign Secretary Robin Cook, addressing a group of executives in
Tokyo, said that the euro is already bringing new strength to EMU’s economies and lauded the euro
as a positive economic force. Normally, nobody would pay much attention to Cook’s remarks but the
euro has become a political issue between the Labor and Conservative Parties. Part of the problem
is that interest rates in England are about double those in the EMU.

A few English towns are experimenting with the use of the euro, and it is now believed that
the consuming public has come around to believing that the euro will be a good thing for England.
Most internationalists believe that England has little choice and must join the EMU to remain
competitive.

On September 5, 1999, Greece, which has been working hard to meet the criteria, announced it
would apply for EMU membership in March 2000, for EMU approval in June. Greece’s inflation rate for
July was 2.1 percent and its annualized inflation rate might be low enough by this March. There are
internal political issues that might come into play which could cause Greece to withdraw its
application for EMU membership. 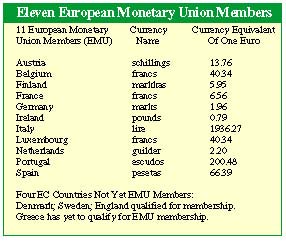 To appreciate how difficult and long
the road to Euroland was we must go back to 1946. Winston Churchill, England’s famous Prime
Minister, envisioned a United States of Europe as it began recovering from the devastation of World
War II.

Together with a few of Europe’s leaders, he realized that each country’s economy could not
sustain itself independently against each other’s, nor could they stand up to the economic might of
the United States. Churchill’s dream crawled and clawed its way to become the 15-nation EU which
conceived, implemented and established the euro.

In the late 1940s, Belgium, the Netherlands and Luxemburg formed the first European Common
Market. As a result of the Treaty of Rome (1957), France and Italy joined and the “Benelux” became
the “Common Market.” As its membership grew, the name changed to the European Economic Community
(EEC).

The euro, even though four EU countries have yet to join the EMU, is backed by the 15 EU
currencies. (Many continue to refer to the euro as the euro dollar. The euro is the euro and the
euro dollar is something different.)

In 1986, the EU took a gigantic step and agreed that all member nations would be internally
duty free by 1993. This act gave the European textile industry a boost by broadening its markets on
the continent.

In 1991, the Maastricht (Holland) Treaty formed the European Monetary Union and the European
Central Bank (ECB) over which political leaders have no say.

Further, it provides that one currency must be implemented by January 1, 1999 for EU members
who meet EMU membership criteria.

In 1995, the first try failed, but the Treaty of Cannes put a new plan together. Every
detail of the EMU had to be approved by all not later than May 1998.

Imagine the more than 2,000 matters
the myriad of sub-committees had to deal with and have ratified so the euro could arrive on time.
It boggles the mind to think of 15 independent national legislatures, with their internal politics
and national pride, could achieve unanimity and that 11 nations would opt to join the EMU.

The Maastricht Treaty, which put
teeth into the EMU, was worked out by Europe’s industrial powerhouses — Germany, France, Italy and
England — without consulting any of their other EU partners. Yet eight more nations joined while
England did not.

The ECB operates with complete independence and every EMU member’s central bank relinquished
its powers to control ECB policies even though ECB decisions might directly affect their nation’s
economies. In effect, national central banks, which act like the Federal Reserve Bank, made
themselves subservient to the ECB, which establishes interest rates, protects currency, etc.

Every rule and act relating to the EMU had to be unanimously ratified by all 15 EU members
by May 1998.

Though the euro’s performance has been less than what had been expected, optimism about the
future of the euro as the powerhouse that drives business has not waned.

There is little room for doubt that the euro is a sales and profit driver, something U.S.
textile companies sorely need.


1) A nation’s budget deficit may not
exceed 3 percent* of Gross Domestic Product (GDP).

2) As of January 1, 1999, inflation cannot exceed 2.7 percent*. The formula that determines
the rate follows: the inflation rate for any member may not be more than 1.5-percent higher than
the average inflation rate of the three member countries with the lowest rates of inflation.

4) Total outstanding government debt must not exceed 60 percent* of GDP or working towards
this target.

5) A member nation’s currency should have remained within normal fluctuation margins for at
least two years before the decision is made to join the EMU. This is an over simplification of a
highly complex matter.

*based on 1997 performance — Rates may change annually.