The year 2013 was one of significant and positive change for NCTO and the U.S. textile industry overall. In April, NCTO successfully completed a merger with two other textile trade associations, the American Manufacturing Trade Action Coalition (AMTAC) and the National Textile Association (NTA). This merger expanded NCTO membership, strengthened the industry’s federal representation, and positioned NCTO as the unequivocal voice of domestic textile producers with both the legislative and executive branches of our government. Although NCTO, AMTAC and NTA previously collaborated closely on important policy issues, the united association has a stronger voice and a broader reach to members of Congress in every part of the country. 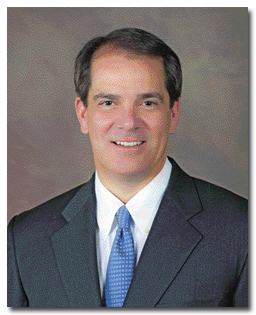 Trade Issues
The year 2014 will be very critical for the U.S. textile industry. This year, it is important to ensure a positive conclusion to the TPP negotiations. TPP remains, by far, the most important policy issue for the U.S. textile industry. TPP continues to pose the largest challenge to the domestic industry in 20 years, with the objectives of negotiating partner Vietnam remaining a critical concern. Throughout the negotiations, the U.S. industry has remained united and engaged. It has stressed that a strong, reasonable rule of origin is essential to ensuring that only the TPP partner countries benefit from the agreement, and any additional flexibilities outside of the short supply list will be damaging to domestic textile manufacturing.

Because the industry has been able to demonstrate the tremendous value that strong rules of origin have for textile manufacturing jobs, investment, and exports, the U.S. government has remained steadfast in pursuit of a yarn-forward rule of origin in TPP. In addition, it is imperative that any agreement include protracted duty phaseouts on sensitive textile and apparel items, and strong customs enforcement provisions. At this point in the negotiations, it appears that each of these goals is achievable. As with previous trade agreements, though, many substantial and potentially damaging provisions could be reserved for the very end stages of the negotiations. 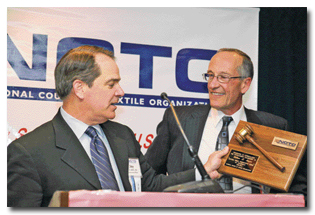 After the conclusion of TPP, the next big trade issue facing the U.S. industry is the Transatlantic Trade and Investment Partnership (TTIP), a free trade agreement between the U.S. and the European Union. If this agreement is structured properly, U.S. and European industries have the opportunity to grow trade and attract new investment. While this may seem to be a simpler overall agreement, there are challenges: The EU is insisting on a complicated “double transformation” rule that effectively cuts fiber and yarn producers out of the agreement. In many cases, that rule also cuts fabric producers out of the agreement. The EU is also pressing for access to U.S. military contracts. NCTO is already working with partners throughout the U.S. industry to communicate their position to the U.S. government and to their industry counterparts in Europe.

Berry Amendment
This year, NCTO is also focused on the need to preserve and enhance the Berry Amendment, which requires that all apparel and other goods made of textiles purchased by the U.S. military contain 100-percent U.S. fibers, yarns and fabrics; and are cut, sewn and assembled in the U.S. The Berry Amendment ensures that critical U.S. military needs are not dependent on foreign countries. Defense procurement has become an extremely important aspect of the U.S. textile industry’s overall portfolio, and will remain an issue of great interest. 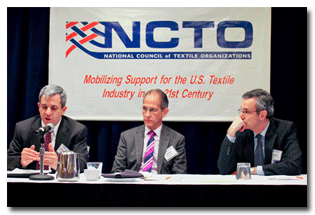 Industry Expansion
These policy developments and challenges come at a time when the industry is enjoying an impressive rebound. U.S. textile shipments topped $56 billion in 2013, up more than 5 percent from the previous year, and U.S. textile exports were $17.9 billion in 2013, up nearly 5 percent. Much of this export growth is due to the yarn-forward rule of origin in this country’s regional free trade agreements, and there is also growth to new markets and growth in new products. Additionally, the U.S. is enjoying an investment surge in new plants and equipment in the textile sector. The fact that companies from lower-wage countries are coming to the U.S. to manufacture textiles says a lot about the competitiveness of the U.S. industry.

After decades of downward pressure on this sector, the U.S. textile industry has not only stabilized, it is expanding in practically every key economic indicator, including investment, output, employment, and exports. NCTO is committed to shaping the discourse in Washington on textiles and apparel, and communicating the value of the industry’s contributions to the U.S. economy and the economies of its Western Hemisphere trading partners. In the coming year, NCTO looks forward to working with lawmakers and the Obama administration to create a stable and logical policy environment that fully recognizes the value of the U.S. textile industry and its workforce. 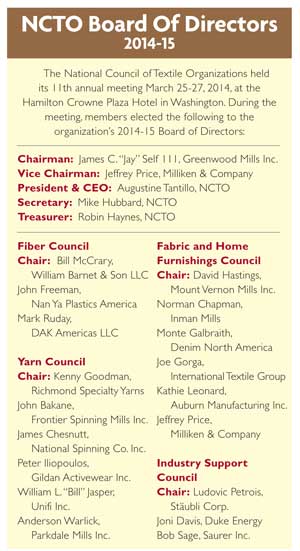