D
omestic textile activity is holding up tolerably well. True, overall mill production is
down, but only fractionally. Other encouraging signs would have to include fairly firm prices and
Chinese import gains that are now increasingly offset by smaller incoming shipments from other
overseas suppliers.

Looking at domestic mill activity first; preliminary April-June returns show production
running only a small 2 to 2.5 percent under year-ago levels. That’s really quite a feat given last
year’s dire predictions following the junking of global quotas. And preliminary forecasts for the
rest of the year and into early 2007 point to pretty much the same pattern.

In any event, declines over the past year have been well under those racked up in 2001, 2002
and 2003 when domestic textile output slipped 10 percent, 4.1 percent and 7.6 percent,
respectively. The bottom line is industry shrinkage seems to be becoming much more manageable than
feared, as increasingly savvy domestic mills take more innovative steps to keep themselves afloat
in today’s increasingly competitive one-world marketplace.

Turning next to prices: Earlier predictions calling for major easing just have not materialized.
Uncle Sam’s widely monitored price index for basic textile products has actually inched up 1
percent since the end of last year. And a similar picture is shaping up for more highly fabricated
textile products, where the average quote is up 0.5 percent over late 2005 readings.

One basic factor behind this relatively strong price performance is improving demand both
here and abroad. Virtually all major countries are now anticipating solid economic growth for the
current year — and this, in turn, is strengthening global demand for textile and apparel products.

Significant increases in mill production costs may also be playing a role in keeping most
prices relatively firm. And this may be doubly true for our major competitor — China. Indeed,
Chinese labor costs in some instances are now reportedly advancing as much as 10 percent per year.
Add in higher raw material costs — aggravated by an undervalued yuan — and it’s easy to see why
that nation’s producers need strong prices if their profits and margin levels are to be
maintained. 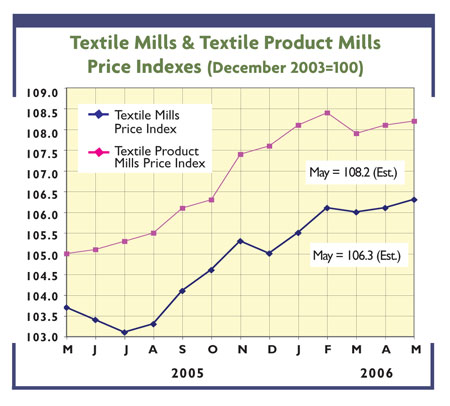 Not surprisingly, those Far Eastern producers are beginning to rethink their overall production
and marketing strategies. For one, they’re resisting pressure on the part of major American buyers
for further price reductions – and in a few cases have actually managed to nudge tags up a
bit.

Equally important, many of these mills are also beginning to put a lot more effort into
upgrading their product lines. Reports, for example, suggest more and more Chinese companies that
produce shirts, pants, skirts and other apparel products are now investing in better, more
efficient sewing and cutting equipment. Their goal is substantially improved quality and products
that will allow a production shift over to higher-profit, value-added apparel. If successful, they
hope to attract new relatively upscale American customers like Gap and Liz Claiborne – thereby
ending their reliance on selling most of their product mix to basically bottom-of-the-line stores
like Wal-Mart and Target.

In the meantime, Washington’s decision not to formally accuse Beijing of manipulating its
currency could also have significant implications. One thing is certain: This recent move would
seem to deprive Congress of a weapon it could use to justify economic retaliation. Other things
being equal, for example, the current bill pending in Congress calling for new tariffs on Chinese
incoming shipments will almost certainly be facing even stiffer legislative hurdles. On the other
hand, the absence of any punitive US measures could give the Chinese an opening to slowly nudge up
the value of the yuan — something that Beijing would have found politically impossible had
Washington decided to really flex its muscles.

The big question, however, remains: Just how much yuan appreciation vis-à-vis the US dollar
is possible? The consensus among economists now is that some upward movement is coming — but that
it will be slow and gradual, given Beijing’s own internal economic pressures. Their best bet for
the yuan is an appreciation of somewhere between 3 and 5 percent by year-end or early next year.
Unfortunately, that won’t be nearly enough to correct the current Sino/US trade imbalance — one
that in 2006 seems almost certain again to approach the $200 billion mark.