In the wake of the highest inflation rates in four decades, increasing interest rates and overall uncertainty about the economic and political direction of the country, consumer confidence in the United States declined for the third straight month in July, according to The Conference Board, a non-partisan, non-profit think tank founded in 1916.

The Conference Board Consumer Confidence Index® decreased in July, following a larger decline in June. The Index now stands at 95.7 (1985=100), down 2.7 points from 98.4 in June. The Present Situation Index — based on consumers’ assessment of current business and labor market conditions — fell to 141.3 from 147.2 last month.

The Expectations Index — based on consumers’ short-term outlook for income, business and labor market conditions — ticked down to 65.3 from 65.8.

“Consumer confidence fell for a third consecutive month in July,” said Lynn Franco, senior director of Economic Indicators at The Conference Board. “The decrease was driven primarily by a decline in the Present Situation Index — a sign growth has slowed at the start of Q3. The Expectations Index held relatively steady, but remained well below a reading of 80, suggesting recession risks persist.

Concerns about inflation — rising gas and food prices, in particular — continued to weigh on consumers.

“As the Fed raises interest rates to rein in inflation, purchasing intentions for cars, homes, and major appliances all pulled back further in July,” Franco continued. “Looking ahead, inflation and additional rate hikes are likely to continue posing strong headwinds for consumer spending and economic growth over the next six months.”

In Q1 Falling consumer confidence is also reflected in newly revised forecasts from Fannie Mae about the state of the U.S. economy. According to a late July assessment, Fannie Mae’s forecast for real gross domestic product growth (GDP) in 2022 was revised to just 0.1 percent on a Q4/Q4 basis, down from its previous forecast of 1.2 percent growth.

“This was largely driven by recent incoming data revisions pointing to a modest contraction of GDP in the second quarter as decades-high inflation and rising interest rates weigh on consumers and firms,” Fannie Mae said. “While we do not believe a recession has yet begun, economic growth is clearly stagnating alongside high inflation. With the full effects of monetary and fiscal policy tightening still working through the economy, we now expect a modest recession to begin in Q1 2023 as opposed to our previous expectation of it occurring in the latter half 2023. Thus, our forecast for 2023 GDP growth was revised downward to negative 0.4 percent from a previous negative 0.1 percent. We forecast the unemployment rate will rise to around 5.5 percent by the end of 2023 compared to the current level of 3.6 percent.”

At this point, demand for fiber, yarn and fabrics has not been affected to a significant degree. Inquiries for cotton remain high, spinners are still operating at whatever capacity staffing will allow.

As NCTO Chairman David Poston said in his recent “State of the Textile Industry” address: “The bottom line is the fundamentals for the U.S. textile industry are sound and a testament to our industry’s resilience in the face of a perfect storm of supply chain disruptions, rising costs and a once-in-a- generation healthcare crisis.

“Based on the growth we are seeing in capital expenditures and strengthened partnerships with our Western Hemisphere partners, the industry is well-positioned to continue adapting to expected disruptions and inflationary pressures and capitalize on opportunities in the year ahead.”

While things are relatively stable for now, discretionary spending is the first to go when consumer confidence falls. “At first, you see a decline in the purchase of big-ticket items — luxuries, cars, appliances and such,” said one analyst. “But, eventually, it trickles down to the point where consumers only buy absolute necessities. None of the predictions we’ve heard to date have yet come to pass. We’re even seeing prices begin to fall at the pump. It is still early enough to avoid a recession this year or early next, but all the right things have to happen at the right times — and quickly.” 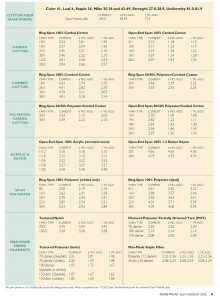