As an increasing number of U.S. citizens become vaccinated against COVID-19, more and more areas of the economy have begun to ramp up operations at or near pre-pandemic levels. Unemployment levels have been dropping at many types of organizations.

According to the U.S. Bureau of Labor Statistics (BLS), some 9.3 million Americans were out of work in April 2021. Interestingly, in May, BLS announced there were 9.3 million job openings in the nation. That equates to a job for every single unemployed worker.

Yet, a number of industries, including yarn spinners and related businesses throughout the fiber/textile/apparel complex, are having a difficult time finding sufficient human resources to operate at desired capacities.

Some economists attribute the labor shortage to federal unemployment subsidies, which have allowed some people to be paid at a rate higher than the wages they were earning before they lost their jobs. As a result, 22 states have announced they will cease participation in the federal program by early July.

The U.S. textile industry was among the first and hardest hit industries as the coronavirus swept across the land in 2020. Now, has some semblance of normalcy has returned, the industry finds itself in critical need of workers.

NCTO President Kim Glas recently told The Washington Post that the need for workers has intensified as the pandemic ebbs and consumers have opened their wallets to purchase back-to-school and casual apparel. She told the post that “shortages are so acute that manufacturers have had to turn down contracts from businesses that want to make their goods in America.”

The irony is not lost on those who have followed the resurgence of the U.S. industry. As hard as yarn and fabric manufacturers have fought to regain America’s place in the global textile market, these same companies are now having to tell valued customers to go elsewhere because of a lack of resources.

Those who lean toward conservative ideals say the reduction or elimination of the federal unemployment subsidy will go a long way toward resolving the issue and that, once normal state unemployment guidelines are back in place, many of these folks will return to work. On the other hand, those with more liberal views say they believe many will refuse to rejoin the workforce for the same jobs they lost until the minimum wage is raised to the point where a normal family with a primary earner making the minimum is able to live above the poverty level.

However, subsidized unemployment compensation and low minimum wages are not the only reasons for the labor shortage in the industry. Since the pandemic began, pay for non-management level textile workers has risen almost 18 percent, to $880 a week. This has led to intense compensation between industry sectors for those qualified employees who do want to work.

The U.S. Department of Commerce announced in late May that imports of polyester textured yarn from Indonesia, Malaysia, Thailand and Vietnam are being unfairly sold below their fair value in the United States.

U.S. Customs and Border Protection will now begin collecting antidumping duties in the amount equal to the dumping cash deposits rates for imports from each country. Importers will be required to post duty deposits to be collected until the Commerce Department and U.S. International Trade Commission conclude their investigations later this year. At that time, the duties could change.

Imports of polyester textured yarn from China and India are currently subject to significant double- and triple-digit charges and countervailing duties as a result of prior investigations that concluded in January 2020.

The recent allegations were initiated by two major U.S. synthetic yarn producers — Unifi Manufacturing Inc. and Nan Ya Plastics Corp., America. These companies filed petitions with the Commerce Department and the Trade Commission claiming that dumped imports of polyester textured yarn from Indonesia, Malaysia, Thailand, and Vietnam were causing material injury to the domestic industry.  The Commerce Department initiated the investigations in November 2020, and the Trade Commission issued a preliminary determination in December 2020 that imports from the four countries are causing injury to the U.S. domestic industry.

Domestic mill buyers inquired for a moderate volume of 2021-crop cotton, color 41 and better, leaf 4 and better, and staple 34 and longer for fourth quarter 2021 through fourth quarter 2022 delivery. Yarn demand remained good, while mills continued to operate below capacity due to persistent labor personnel shortages. Personal protective equipment continued to be produced for frontline workers and consumers. 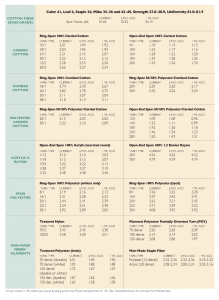