Nearly 400 years ago,an English theologian named Thomas Fuller first wrote the words, “It’s always darkest before dawn.” From the reality of 2020, to the forecasts for the remainder of 2021, perhaps at no time in U.S. history have such words been more appropriate.

Even as vaccinations against COVID-19 accelerate, new outbreaks are occurring — largely in states and cities that have rescinded mandatory mask ordinances and reduced social distancing requirements. The CDC estimates that nearly 600,000 Americans will have lost their lives to the pandemic by the end of April.

At the same time, the rate of vaccinations continues to increase. COVID-19 vaccine distribution began in the United States on December 14. Through the last week
of March, more than 147 million doses have been administered, fully vaccinating over 53.5 million people or 16.1 percent of the total U.S. population. In many states, vaccination stages have escalated much more quickly than expected. Most initially thought it would take until late Spring to get through Stages 1a and 1b. However, as of the end of March more than a dozen states are making — or preparing to make — vaccines available to all adults.

As a result, those who look toward the future with expert eyes are making aggressive — even staggering — projections about U.S economic growth the year. Economists at Goldman Sachs, for example, project GDP to grow at a rate not seen in this country for70 years. In a note to its clients, the company wrote, “We have raised our GDP forecast to reflect the latest fiscal policy news and now expect 8 percent growth in 2021 (Q4/Q4) and an unemployment rate of4 percent at end-2021.”

The last time U.S. GDP grew at 8 percent was 1951. Goldman Sachs’ prediction is more aggressive than most. The average prediction among Wall Street analysts is in the range of 4.5 to 5 percent.

Consumers are also optimistic about the economy. A recent release from the Conference Board shows that the Consumer Confidence Index® surged in March to its highest reading in a year, after a modest increase in February. The Index now stands at 109.7 (1985=100), up from 90.4 in February. The Present Situation Index —based on consumers’ assessment of current business and labor market conditions — climbed from 89.6 to 110.0. The Expectations Index — based on consumers’ short-term outlook for income, business and labor market conditions — also improved, from 90.9 last month to 109.6 in March.

“Consumer confidence increased to its highest level since the onset of the pandemic in March 2020,” said Lynn Franco, senior director of Economic Indicators at The Conference Board. “Consumers’ assessment of current conditions and their short-term outlook improved significantly, an indication that economic growth is likely to strengthen further in the coming months. Consumers’ renewed optimism boosted their purchasing intentions for homes, autos and several big-ticket items. However, concerns of inflation in the short-term rose, most likely due to rising prices at the pump, and may temper spending intentions in the months ahead.”

Economic growth is already apparent in U.S. fiber, yarn and fabric mills. While output for 2020 was down, significant growth was apparent in the last several months of the year, said NCTO Chairman David Roberts in his recent “State of the U.S. Textile Industry” address. “I’m happy to report that, at least anecdotally, business is coming back at
a fast clip in the first quarter of this year, as orders continue to bounce back in line with rising consumer demand and retail sales.”

A primary objective of NCTO is to significantly increase personal protective equipment (PPE) production in the United States. To that end, NCTO recently announced that the Biden Administration has awarded contracts to Parkdale Mills and Ferrara Manufacturing Inc., following through on the president’s pledge to procure millions of fully Made in America face masks for community health centers, food pantries and soup kitchens across the country. A third contract is expected to be awarded to a small business early next week.

Gastonia, N.C.-based Parkdale Mills, the nation’s largest cotton yarn spinner, and Ferrara Manufacturing, a tailored clothing company based in New York City’s garment center, are to manufacture more than 17 million reusable masks. The government said it could purchase up to a maximum of 22.2 million masks under the contracts. The masks will be Berry compliant and, as a result, 100-percent U.S.-made. 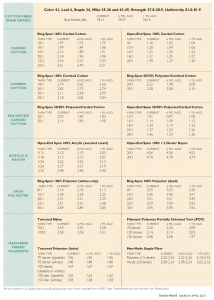