A year after original trilateral negotiations concluded, it seems the United States-Mexico-Canada Agreement (USMCA), the Trump Administration’s replacement for NAFTA, might finally become a reality.

While an earlier push to get the agreement ratified by Congress before Thanksgiving failed, Congressional Democrats — many of whom had previously objected to some provisions of the trade bill — reached an agreement in early December to move forward with ratification of a modified agreement. Of particular concern to a number of Representatives and Senators were USMCA provisions dealing with enforcement tools for labor and environmental standards.

In a news conference on December 10, House Speaker Nancy Pelosi said the USMCA, as it now stands, is “a victory for America’s workers.” She said the revised agreement was much better than what the Trump Administration originally proposed.

U.S. Trade Representative Robert Lighthizer said USMCA “will be the model for American trade deals going forward.” Lighthizer, along with representatives from Mexico and Canada, signed the revised USMCA agreement in Mexico City on December 10.

At this point, the House could approve the trade bill by the end of the year.  The Senate, however, is expected to be occupied with the impeachment trial of President Trump, which could push ratification into 2020.

Early on December 10, Trump tweeted: “America’s great USMCA Trade Bill is looking good. It will be the best and most important trade deal ever made by the USA. Good for everybody – Farmers, Manufacturers, Energy, Unions – tremendous support. Importantly, we will finally end our Country’s worst Trade Deal, NAFTA!”

Before the agreement can be implemented, the legislatures of all three countries must ratify the trade deal. Mexico, which earlier approved the original agreement, must now ratify the revisions.  The Canadian Parliament, like Congress, has not yet ratified the agreement.

While trade relations among two major U.S. trading partners are seemingly on the verge of improvement, the trade war with China continues, albeit uncertainly. In November, China revealed new guidelines increasing protection of intellectual property, which has been a U.S. concern for years. China indicated that it could both toughen IP protections and ramp up enforcement.

In November, CNN reported that “China is definitely offering up some pretty attractive olive branches.” And, according to Bloomberg, “The U.S. and China have agreed to roll back tariffs on each other’s goods in stages as negotiations continue over resolving the more than year-long trade war.”

Bloomberg quoted a China Ministry of Commerce spokesman: “In the past two weeks, top negotiators had serious, constructive discussions and agreed to remove the additional tariffs in phases as progress is made on the agreement.”

At the same time, $160 billion of additional U.S. tariffs on Chinese products are scheduled to be imposed on December 15. President Trump only has a few days to decide whether or not the tariffs will be put in place. Doing so is likely to roll back any progress that has been made to date, according to multiple trade experts. “If the White House does allow the Dec. 15 tariffs to take effect, then the U.S.-China deal talks are likely done for the remainder of President Trump’s term,” one source told Reuters.  The way the tariffs are written, they will automatically be imposed unless Trump acts to stop them. Numerous textile goods are on the list for the December tariffs.

Overall, many spinners said they had a solid year through most of 2019. Through summer and into early fall, several spinners reported full schedules with healthy backlogs. “We are running full out and have a healthy backlog,” one spinner noted mid-year. Our business is doing very well.  We have some limited capacity come open at times, but, overall, we’re pretty much full, with a nice pipeline of orders. This has been the best start of the year we’ve had in some time.”

However, business began to slow down near the end of the third quarter for some spinners. One executive pointed to robust holiday orders. He said he expects business to pick up substantially after holiday sales, once retailers have the opportunity to assess inventory. Another spinner, however, attributed the slow-down to fear of a possible early 2020 recession. “I think a lot of business executives think we are overdue for a recession, and they are being cautious about restocking,” he said. “If the bottom does fall out, they don’t want to be stuck with excess inventory that is not moving off the shelves. I don’t think anyone is necessarily projecting gloom and doom, but they are being cautious.”

Spot quotations for the base quality of cotton (color 41, leaf 4, staple 34, mike 35-36 and 43-49, strength 27.0-28.9, and uniformity 81.0-81.9) in the seven markets measured by the USDA averaged 60.04 per pound for the week ended December 5. The weekly average was down from 75.19 cents reported the corresponding period a year ago. “Inquiries from domestic textile mill buyers were light; no sales were reported,” according to a USDA release. “Most mills have covered their raw cotton needs through the first quarter of 2020. Domestic cotton shippers and mill buyers were busy scheduling deliveries of raw cotton to mills during the holiday season. Open-end and ring-spun yarn demand was moderate. The undertone from mill buyers remained cautious as they monitored ongoing U.S./China trade negotiations.” 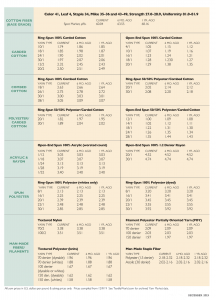