Over the past few months, many spinners have noticed a noticeable drop off in orders. While they give multiple hypotheses for the somewhat stagnant business conditions, none say they are really sure what has changed.

“Normally, we have a decrease after holiday orders are delivered, but not quite like this,” said one spinner. “Part of it, I think, is caution by our customers as a result of the current environment in Washington. I don’t think anyone knows exactly what is going to happen, but the potential for impact on the economy is there.”

Another spinner said, “I think a lot of business executives think we are overdue for a recession, and they are being cautious about restocking. If the bottom does fall out, they don’t want to be stuck with excess inventory that is not moving off the shelves.”

Yet another spinning executive attributed the slowdown to increased imports. “Because of looming tariff increases, customers are buying as many products from China as they can before prices increase. Even though the tariffs scheduled for October have been delayed by President Trump, there are still increases scheduled for December. So, unless the U.S. and China come to some agreement, many Chinese imports will be considerably more expensive for U.S. buyers after December 15.”

The December increase, if implemented, will place an additional 15 percent tariff on about $160 billion in Chinese products.

Numerous issuesand the expanding global supply chain have made traceability more important over the past few years.

A number of companies have invested millions in tracking processes that trace a product from point of origin, through every step in manufacturing/fabrication process and, ultimately, up to consumer purchase. Traceability is also becoming prevalent in the textile industry, particularly to help counter country-of-origin fraud and counterfeit products.

“The textile supply chain is a complex network and a lot can happen in the process between the various production lines or stages — from the production of fiber and yarn and on to weaving or knitting the textile, the garment production, the transportation to the retailers, and finally to the consumer,” said a doctoral student at a Swedish university. Tarun Kumar Agrawal, at the Swedish School of Textiles, University of Borås, has developed a traceability method using blockchain technology. Originally developed to trace cryptocurrency transactions, Blockchain is a digitized, decentralized, immutable ledger of transactions that, in theory, is virtually tamper-proof and provides complete supply-chain transparency to involved stakeholders.

Agrawal was quoted recently by the website phys.org: “Consumers want to know where the garment they buy comes from, what it is made of, and if it is ethically produced. At the same time, the producers want to show that their products keep promised quality and are sustainable, and they want to be able to protect themselves from counterfeiting.”

Traditional textile traceability has been based on such things as RFID and QR codes, but these systems are limited in scope. By expanding traceability technology, consumers can now be assured that the product the receive is to the specifications they expect.

One company in the industry investing heavily if traceability is Oritain, a London-based company that specializes in verifying origin. Recently, Oritain and COTTON USA signed a partnership to provide forensic verification of origin for all U.S. cotton. “A global first for the cotton industry, this collaboration will give brands and retailers the assurance they need to make responsible sourcing and purchasing decisions,” according to a recent press release.

“We want to support Cotton USA who are making a conscious effort to find real, workable ways of farming more sustainably,” said Rupert Hodges, executive director, Oritain. “The result is an incredibly high-quality crop that not only performs well but supports the environment. Now through Oritain, customers who choose U.S. cotton can have total confidence that they are getting the product that they sourced.” 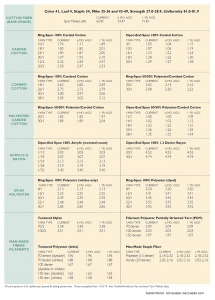 Editor’s Note: It was incorrectly reported in the October 2019 edition of Yarn Market that both the legislatures of Canada and Mexico have ratified the USMCA. To date, only Mexico has done so.