The United States-Mexico-Canada agreement, the Trump-administration negotiated potential successor to NAFTA, is finally gaining momentum in Congress and may become a reality by the end of the year.

Lawmakers have made significant progress in resolving disagreements over the provisions of the agreement. The New York Times is reporting that a decisive vote could occur before Congress adjourns for Thanksgiving. “We are on a path to yes,” Speaker Nancy Pelosi told reporters in early October, an indication that she would put considerable emphasis on the agreement’s passage.

“Both parties have strong political incentives to approve the trade deal despite deep Democratic skepticism over such pacts after American jobs flowed into Mexico after the ratification of NAFTA in 1993,” the Times reported. “For President Trump and Republicans, the agreement is a major priority that could bolster American businesses and help struggling farmers, while showing voters that they have been good stewards of the economy. For Democrats, the accord is a way to give lawmakers from swing districts a broadly popular achievement to show constituents, and a way to counter criticism that they have accomplished little during their time in Washington, which has more often consisted of passing legislation that dies in the Republican-controlled Senate.”

The legislatures of both Mexico and Canada have already ratified the agreement and have been waiting anxiously waiting on the United States to do the same.

“USCMA would update and replace the 25-year-old North American Free Trade Agreement (NAFTA). The NAFTA supply chain,” according to the NCTO,  “drives approximately $20 billion in annual trilateral textile and apparel trade, up from just $7 billion prior to NAFTA, and is important to the continued growth of the industry. The updated USMCA makes several key improvements, including stronger rules or origin for sewing thread, pocketing, narrow elastics and certain coating fabrics. In addition, it fixes the Kissell Amendment loophole and ensures stronger customs enforcement.  These provisions will benefit our U.S. textile industry.”

Business remains solid for most spinners, but is not quite as robust as earlier in the year. Much of this drop, according to industry experts, is a result of a historic flood of imports. Imports at the nation’s major retail container ports are expected to hit their highest level of the year again in November, just before more tariffs take effect in December, according to the Global Port Tracker report released in October by the National Retail Federation (NRF) and Hackett Associates.

“This is the last chance to bring merchandise into the country before virtually everything the United States imports from China comes under tariffs,” National Retail Federation Vice President for Supply Chain and Customs Policy Jonathan Gold said in a recent release. “Retailers are doing all they can to mitigate the impact of tariffs on their customers. The effect on prices will vary by retailer and product during the holiday season, but ultimately these taxes on America businesses and consumers will result in higher prices. We urge the administration to use (tariff) talks with China to make progress toward ending the trade war and return to policies that promote long-term economic growth and prosperity for American families.”

While the impact of  recent imports is being felt by the spinning industry, to date it has not been substantial. “We’ve seen a slight decrease in orders,” said one spinner. “A few months ago, we were running full out and had a nice backlog.  Now, we’re still running full, but we have to be more aggressive in attracting the business.” He attributed the slowdown more to the time of the year than an increase in imports. “We’ve delivered holiday orders and will need to wait on some inventory adjustment after the holidays to see where we stand. We expect business to return to its previous state by the beginning of the year.”

There is, in fact, good news for spinners regarding holiday sales. NRF said it expects holiday sales to increase between 3.8  and 4.2 percent over 2018. Total sales are projected by NRF to be between $727.9 billion and $730.7 billion. These numbers compare to  an average sales increase of 3.7 percent over the previous five years.

“The U.S. economy is continuing to grow, and consumer spending is still the primary engine behind that growth,” said NRF President and CEO Matthew Shay. “Consumers are in good financial shape and retailers expect a strong holiday season.” 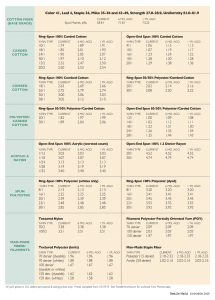