Results for yarn sales in the first quarter of the year ranged from “solid” to “very strong,” according to various spinners. There was little of the traditional first-of-the-year slump caused by retail inventory adjustment, as retailers had their best holiday season in years.

“We are running full out,” noted one spinner. “We have positions available, but they are very limited.” As has been the case for the past few years, ring spinning is in very high demand, and spinners recommend orders be placed as far in advance as possible. “If a customer calls and wants x amount of ring-spun yarns by the end of next week, it is just not going to happen,” said one industry leader.

By all indications, the industry is stronger than it has been in years, as evidenced by addresses at the recent National Council of Textile Organizations (NCTO) annual meeting.

Outgoing 2018-2019 NCTO Chairman Marty Moran of Buhler Quality Yarns, in his recent 2019 State of The U.S. Textile Industry Address, said: “It has been an amazing year for the U.S. textile industry.” He noted he following in his speech:

Further, he said, “In 2018, the value of U.S man-made fiber and filament, textile and apparel shipments totaled and estimated $76 billion.” That is an increase of 12 percent from the previous year.

U.S exports of fiber, yarns, fabrics, made-ups and apparel accounted for 30.1 billion last year, a 5.4 increase in export performance. “The United States is especially well-positioned globally in fiber, yarn, fabric, and non-apparel sewn products markets; it was the world’s 2nd largest individual country exporter of those products in 2018,” Moran said. “Shipments to NAFTA and CAFTA-DR countries accounted for 47.5 percent of all U.S. textile supply chain exports,” he said. Included in those export figures were $4.4 billion in yarns.

NCTO fully backs the United States Mexico Canada Agreement (USMCA) agreement, the successor to NAFTA. Yet, while signed by the appropriate parties of all three nations, the agreement still must be ratified by the individual legislators. And that is where it might meet a roadblock in the United States.

President Trump has repeatedly praised the USMCA, often touting the trade deal as one of his administration’s major accomplishments, according to Yahoo News.

“Recently, Trump has threatened to impose 25 percent tariffs on Mexican cars or close the border if the country does not crack down on migrants and drugs entering the United States,” according to the news source. The president acknowledged concerns about what the move would mean for USMCA.

In addition to recent threats of tariffs, USMCA has many critics in Congress over various issues, including tariffs on some Canadian products and labor law reforms in Mexico. 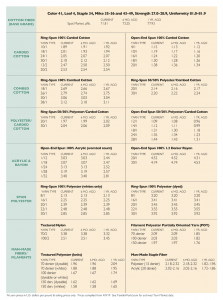