Several spinners said that, while orders remain relatively brisk, they have begun to slow a little as the end of the year approaches.

“This is a normal cycle for us, noted one spinner. “We expect business to generally stay strong and pick back up to normal levels as the new year begins.”

Indeed, spinners have reason for optimism. U.S. consumer confidence was at an 18-year high at the end of September. Consumers were more upbeat about the labor market, pointing to sustained strength in the economy, despite the escalating trade dispute between the United States and China. The increase is estimated to boost household wealth and continue to support consumer spending, as well create opportunities to make home purchasing more affordable for first-time buyers.

“After a considerable improvement in August, Consumer Confidence increased further in September and hovers at an 18-year high,” said Lynn Franco, director of Economic Indicators at The Conference Board. “The September reading is not far from the all-time high of 144.7 reached in 2000. Consumers’ assessment of current conditions remains extremely favorable, bolstered by a strong economy and robust job growth. The Expectations Index surged in September, suggesting solid economic growth exceeding 3.0 percent for the remainder of the year. These historically high confidence levels should continue to support healthy consumer spending and should be welcome news for retailers as they begin gearing up for the holiday season.”

It will still be some time before the new agreement can take effect, as it still needs to be ratified by all three countries. The earliest U.S. President Donald Trump can sign the agreement is near the end of November, 90 days after notifying Congress. The U.S. International Trade Commission has 150 days after the agreement is signed to release an assessment of the new pact. Finally, Congress will need to enact legislation to approve and implement the agreement.

Textile officials are hailing the agreement as a win for both the United States and the textile industry. “The U.S. textile industry is pleased the United States, Mexico and Canada have reached an agreement because Canada and Mexico are its largest trading partners,” said National Council of Textile Organizations (NCTO) President and CEO Auggie Tantillo. He noted that products from the textile and apparel supply chain accounted for nearly $12 billion in U.S. exports to Canada and Mexico in 2017.

“Unlike the original NAFTA, the new agreement includes a separate textile and apparel chapter. This outcome is a tangible recognition by all three parties of the importance of textile manufacturing to the regional economy,” Tantillo added as he explained that NCTO would not be making any further comment with respect to the deal until the substance of the agreement could be carefully analyzed by NCTO.

USMCA still adopts the “yarn-forward” rules of origin. NAFTA was the first trade agreement to include the yarn-forward rule. Since then, the rule has become standard in nearly every agreement negotiated by the United States.

Average spot market cotton quotations for the week ending October 11 were 59 points higher than the  previous week, according to the USDA, Agricultural Marketing Service’s Cotton and Tobacco Program. Quotations for the base quality of cotton (color 41, leaf 4, staple 34, mike 35-36 and 43-49, strength 27.0-28.9, and uniformity 81.0-81.9) in the seven designated markets measured by the USDA averaged 73.25 cents per pound for the week, up from 72.66 the previous week and from 67.04 cents reported during the corresponding period a year ago. The ICE December settlement prices ended the week at 76.81 cents, compared to 76.00 cents the previous week. 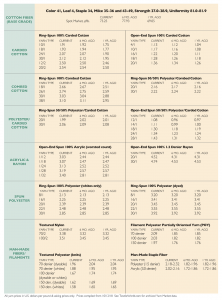