Yarn demand remained strong in the middle of the third quarter, with many spinners operating at or near capacity. “It has been a good year so far,” said one spinner. “Business has been consistently strong.”

“We are happy with where we are,” said one multi-national spinner. “In fact, just about everybody I’ve talked to says their business is good.” He continued: “Cotton yarns are still moving well, even though the price of raw cotton has moved up a bit since the beginning of the year. We are selling a lot of blends, as well.”

Spinners expect a slow down in sales of yarn for apparel near the end of the year. “You always see the demand for apparel yarns drop around the beginning of the holiday season,” a spinner said. “Customers have put in all of the holiday orders and they will wait for an inventory adjustment before placing any new orders. Other than apparel yarns, I expect the rest of the business to be strong for the foreseeable future.”

Spinners interviewed said they have not been impacted much by the escalating trade conflicts between the United States and several other countries, particularly China.  “I don’t think we’ve seen any effects of it at all to this point,” said one industry observer. “It really depends on what happens next. We would certainly like to see textile and apparel products get more protection. If things don’t settle down, I think you will start to see a lot of U.S. companies look for suppliers in other Asian countries.”

With trade with China getting a lot of attention, the on-going negotiations to revise NAFTA seem to be falling beneath the notice of mainstream media. However, the nations still seem relatively far apart in resolving the issue. The sticking point at the moment is automobile tariffs. U.S. negotiators had agreed that a new NAFTA trade deal would exempt existing Mexican auto plants from any “Section 232” tariffs imposed by President Donald Trump. But negotiators did not want to apply the exemption to new Mexican auto plants. Overall, spinners have different opinions on the impact of NAFTA to their businesses. But most agree that yarn-forward rule of origin clauses contain loopholes that benefit third-party countries, such as China. According to the National Council of Textile Organizations, closing those loopholes would boost U.S. and NAFTA partner textile and apparel production and jobs.

It has been well known for some time that ring-spinning capacity in the United States is insufficient to meet customer needs during periods of high demand. As previously reported, Keer America Corp. completed its new ring-spinning plant in South Carolina in June. On June 21, the company hosted a grand opening for customers and selected guests. Spinning began on two frames in late June and the company expects 40 new Rieter spinning frames to be in production by end of the year, along with five Saurer Zinser frames for coarse yarns. Total capacity for the 75,000 spindles will be 40 million pounds per year, according to the company. 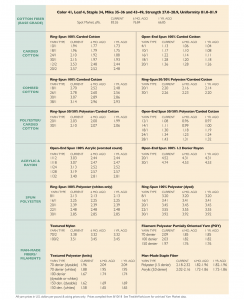