After a disappointing end to 2016 and a sluggish beginning to 2017, spinners are finally beginning to regain some optimism. A number of spinners reported a significant uptick in orders beginning in early March.

“I wouldn’t say business is great right now, but it is certainly better than it was. We’ve been getting a steady stream of orders for the past five or six weeks and inquiries are on the rise,” said one spinner. Another commented: “It looks like we beginning to return to normal. We’ve had a noticeable increase in interest. The sizes of the orders are getting a little bigger. We are beginning to build a little bit of a backlog again.”

One yarn broker noted: “A lot of it certainly depends on what you have to offer. Ring-spun and air-jet yarns are getting a lot of attention. Positions are beginning to get a little tight again. Orders for OE yarns, in general, are still a bit light, but are improving.”

Interest is particularly high in specific categories. “I have had a lot of interest in organic products lately, and I think this will continue to grow, given the growing consumer obsession with organic everything.” Other products attracting particular attention, he said, include fire retardant yarns and products used for filtering. “As the oil industry continues to recover, I think you will see these categories continue to grow.”

One spinner noted business has recovered in a lot of key areas, but some still have room for improvement. “We are seeing renewed interest in a lot of areas. One area that has not come back as strong as I thought, however, is home furnishings. I expect business to pick up substantially here in the very near future.”

For quite a while, spinners have puzzled about the cause of the recent downturn. Now that business is beginning to turnaround again, some answers are beginning to appear.

“For quite awhile, we attributed the decrease in orders to a significant inventory correction by our customers. We knew they were over-ordering, especially in the case of ring-spun yarns, when positions were very tight. We figured they would deplete that inventory and then resume business as usual. Except it didn’t happen that way. Now, we have some evidence of what really happened.”

Another spinner agreed: “I think it was a lingering hangover from the TPP [Trans-Pacific Partnership trade agreement]. Back at the beginning of last year, when it appeared the TPP was imminent, it appears a lot of companies started moving programs to Asia — to take advantage of the lower costs the TPP promised them. Then, when it became obvious that TPP was not going to become a reality — at least during the next four years — companies began moving this business back to this hemisphere.  Obviously, there was a time lag for this to happen.”

Despite the renewed optimism among spinners, there are still a few concerns. Pricing and margin concerns are at the top of most spinners’ lists. “We can sell all the yarn we can make,” said one spinner, “but if we can’t make a profit, what’s the use?  Margins continue to be a lot thinner than we would like. We are doing everything we can to keep our prices as low as possible, but, in a lot of cases, we have to rely on our value-added advantages to create differentiation — quality, delivery and service.

Spot market cotton prices remained relatively stable over the first quarter of the year.  As of the week ended April 13, quotations for the base quality of cotton (color 41, leaf 4, staple 34, mike 35-36 and 43-49, strength 27.0-28.9, uniformity 81.0-81.9) in the seven designated markets measured by the USDA averaged 72.39 cents per pound. The weekly average was down from 72.51 the previous week, but up from 58.89 cents reported during the corresponding period a year ago. Spot transactions reported for the week totaled 9,639 bales. This compares to 17,150 bales reported the previous week and 14,906 spot transactions reported during the corresponding week a year ago. The ICE May settlement prices ended the week at 75.62 cents, compared to 74.51 cents the previous week. 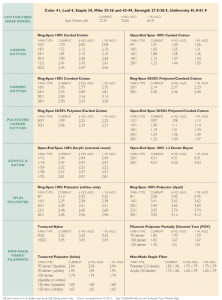