As of early November, yarn spinners report a continuation of the sluggish business conditions that have largely existed since the beginning of the year. Holiday orders were well below expectations for several spinners, and prospects for improvement seem to be somewhat slim for the immediate future.

“We haven’t seen any real significant change in our business over the last eight or nine months or so,” said one spinner. “We’ve seen little periods of activity here and there, and we thought some business was going to pick up, especially in the area of specialty yarns, but that really hasn’t materialized. Any improvement we’ve had seems to be in little spots and of brief duration, and is, obviously, related to our supplier inventories.” Said another spinner:

“As hard as it is to believe at this time of year, it seems there is still some inventory that knitters and weavers are working their way through — inventory that was purchased earlier in anticipation of limited yarn availability. As apparel items and such haven’t just flown off the shelves lately, a lot of our customers still have more inventory than they need. And they are not going to reorder until they absolutely have to.”

Business is not only slow for U.S. spinners, but is also weak for much of the Western hemisphere. “A lot of our business is in Central America,” said one spinner, “and that business has been very weak for some time. I believe excess inventory for our customers and at retail was a significant contributor to this earlier in the year, but I now think the overall issue is global instability. Brexit is an issue, as is the U.S. election. What is going on in Syria, in the Ukraine and in the South China Sea? People around the world, I believe, are just waiting for everything to get back to normal, if there is such a thing.” Another spinner said,” I don’t think the business at retail is as strong as economic conditions and consumer confidence suggest it should be, especially for textile products, and it is, clearly, not as strong as we need it to be. It’s weird when cars are selling, but clothes and towels aren’t. It seems that everything is just a bit off, and the national nervousness emerging from the election isn’t helping at all.”

Optimism On The Horizon

Despite the relatively show conditions that have persevered for much of the year, spinners remain cautiously optimistic that orders will begin to pour in shortly after the beginning of the year. “One of the things that has happened over the past decade is that demand and production capacity have roughly equalized in the United States,” said one spinner. “In fact, over the past several years, you have seen enough demand that, for the first time in nearly four decades, capacity has begun to expand. I believe, after the election and after the holidays, we will see a gradual increase in orders and that, before long, we will get back to where we have been the past few years.”

Added another spinner: “You don’t see three years of solid business just disappear for no reason. There have been numerous circumstances that have contributed, and I think, by early in the first quarter of 2017, we will see a return to normalcy.”

Quotations for the base quality of cotton (color 41, leaf 4, staple 34, mike 35-36 and 43-49, strength 27.0-28.9, uniformity 81.0-81.9) in the seven designated markets measured by the USDA averaged 68.08 cents per pound for the week ended Thursday, October 27, 2016. The weekly average was down from 69.47 cents the previous week and up from the 60.80 cents reported the corresponding period a year ago. Daily average quotations ranged from a low of 67.49 cents Tuesday, October 25, to a high of 68.90 cents Thursday, October 27. Spot transactions reported in the Daily Spot Cotton Quotations for the week ended October 27 totaled 16,397 bales. This compares to 18,347 bales reported the previous week and 15,647 spot transactions reported the corresponding week a year ago. Total spot transactions for the season were 78,945 bales, compared to 90,717 bales the corresponding week a year ago. The ICE December settlement prices ended the week at 69.76 cents, compared to 69.80 cents the previous week. 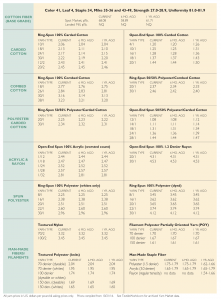