Spinners foresee a continuation in 2016 of the solid business conditions that have existed for the past few years. Despite this optimism, January was the slowest month many have seen in some time.

“Our orders got really sluggish after Christmas,” said one spinner. “More than anything, I think it was due to an inventory correction.” Another spinner agreed: “Ring-spun yarns have been in high demand for a long time. I think a lot of customers held on to their ring-spun positions just so they would have them. Then, after the holidays, they found themselves with a load of inventory.”

Said another spinner: “One day we have orders coming in like normal, and then, the next day, it turns into a trickle, drip, drip, drip. I don’t think this is a long-term deal; I think it is just customers using their yarn inventory. Knitters and weavers tell me they are still running full schedules, so we expect business to return to normal soon.”

Another observer commented: “At this point, we expect 2016 to be a very solid year, unless something unexpected arises. New jobs are being created, demand is strong, raw material prices are falling and energy prices are decreasing.”

Added one industry executive: “We see no reason for the momentum we have established over the past several years to slow. Continued prosperity will enable us to continue to invest in the most modern equipment.

This will further increase productivity and reduce costs for the manufacturer, its customers and the end-consumer.”

Spinners have other reasons for optimism as well. The text of the long-negotiated, but highly secret Trans Pacific Partnership (TPP) Agreement was released in late 2015. The agreement contained most of the language U.S. textile leaders had hoped for. “Based on our generalized understanding of the final agreement reached last month, we believe that many of the U.S. textile industry’s key objectives have been met, including a yarn forward rule of origin for most products and reasonable duty phase-outs for sensitive textile and apparel items,” industry trade organization NCTO said in a news release. “While we need to thoroughly familiarize ourselves with the fine details of the agreement, we feel that the U.S. government was able to achieve a well-balanced outcome for all parties, including U.S. textile manufacturers and our partners in the Western Hemisphere.”

The U.S. Trade Representative’s office says TPP will be a boon for U.S. manufacturers. “TPP’s Textiles and Apparel chapter will create export opportunities for Made-in-America clothes, fabrics, and yarns and support jobs in the United States. This objective is advanced by a “yarn-forward” approach that requires use of yarns and fabrics from TPP countries in end products qualifying for preferential treatment under TPP — with some flexibility so that American businesses and workers whose products depend on inputs not available within the TPP region can still benefit. The yarn-forward approach also will help to develop a regionally integrated supply chain that will promote long-term growth and investment in this sector in the United States. The Textiles and Apparel chapter also secures close customs cooperation among TPP Parties to facilitate effective enforcement of the rules; and ensures that U.S. companies have access to temporary relief if an import surge causes, or threatens to cause, serious damage to their business.

Further, the Trade Representative office maintains that “TPP will eliminate tariffs on U.S. exports of textiles and apparel to the other TPP markets, with many tariffs going to zero on day one, and others being phased out. We have reached a carefully crafted U.S. tariff elimination package with our TPP partners that takes into account the specific sensitivities of the United States.” 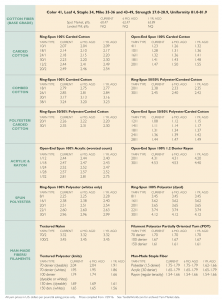