With the increasing construction of fabric structures, architectural membranes are gaining increasing prominence in China due to their combination of positive qualities such as heat insulation, sound insulation, light weight for easy transportation, hydrophobic properties that allow rain to create a self-cleaning effect and the semi-transparency that allows ultraviolet (UV) light from sunlight to create an automatic bleaching effect and more qualities. With increasing income level in China, booming demands for leisure and travel will drive up the demand for fabric structure. Given that the majority of current fabric structure projects that use membrane materials are public investment projects, such as stadiums and airports, and do not generate much profit directly, the growth in this sector is mainly supported by the government’s public infrastructure growth strategies and is subject to high volatility from policy changes. However GCiS believes that it is not likely to be a major concern for the industry’s development in the near future as China is still investing heavily into its second-tier cities.

Membrane Material Used in China
Though fabric structures have existed for thousands of years, modern day architectural membranes are a relatively new type of building material that has only been around for a few decades, and only started gaining prominence in China in recent years around the time of the 2008 Beijing Olympics. One iconic membrane structure in China is the Water Cube, which is made of the highest quality membrane ethylene tetrafluoroethylene (ETFE). Two other key membrane material widely used in China are polyvinyl chloride (PVC) and polytetrafluoroethylene (PTFE). With the exception of ETFE, membranes actually derive  flexibility from the fabric underneath — such as polyester or fiberglass — while the plastic is what gives these fabrics the additional protection they need to stand against natural weathering; ETFE can be directly shaped into sheets. In terms of the differences between products, PVC membrane is a type of synthetic thermoplastic coated on polyester fiber and is one of the cheapest membrane products. PTFE is a plastic with strong carbon-fluorine bonds usually coated on fiberglass material to give improved properties and durability compared to PVC. ETFE is a fluorine-based plastic and is considered the highest quality product among architectural membranes with the best durability and resistance against natural weathering, but it is also the most expensive, with average prices five times that of PVC membranes. There are two main types of membrane structures, tensile structures that are shaped through tension, compression or bending and pneumatic structures that are supported by internal pressurized air.

Material Chosen by Different City Tiers
The largest difference in revenue stream between the different city tiers can be seen in the PVC product segment, where second-tier cities dominate over half of the total PVC product revenue. This is likely due to a combination of the lack of demand for expensive high quality products in second-tier cities and the lack of large-scale iconic projects in first-tier cities. Because second-tier cities are not as wealthy, the budget of iconic city projects is not likely to be as high as the ones found in first-tier cities. This may cause some end-users to opt for the cheaper PVC, which could be up to 10 times lower than the price of PTFE membranes. Additionally, many of the large-scale iconic membrane structures have already been developed in the first-tier cities and what remains are smaller-scale projects that do not require large quantities of architectural membrane, thus further restricting the revenue from these cities. 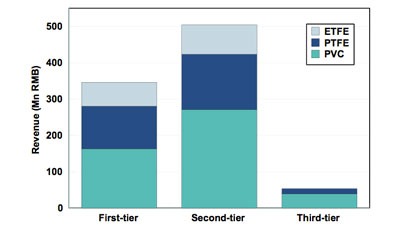 Competition Landscape
The ETFE and PTFE product segments are expected to grow the fastest as developers in China demand for stable high quality products. However, given architectural membranes have only been in the country for a short period, domestic suppliers still have a lot of catching up to do in terms of technology to compete with  foreign firms in the high-end markets with the highest profit margins. This difference in product quality results in much higher prices charged by foreign suppliers, which may see prices as high as five times the price of the cheapest product in the PVC market, thus foreign suppliers are able to gain significant revenue market share with limited output. However, domestic suppliers are expected to have the advantage in the long run  because they can enjoy the benefits of producing locally while essentially all the foreign suppliers still import their products into the China market. This phenomenon is largely due to foreign supplier’s fear of losing their technical advantage as a result of technological piracy; given China has a reputation for its ability to replicate foreign technology at low costs. Unstable quality products from domestic suppliers coupled with the high prices of foreign products, have been major inhibitors to the industry’s growth. 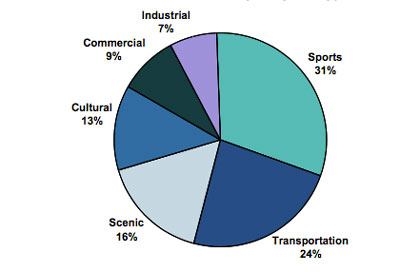 Conclusion
In summary, the demand for fabric structures in China is growing very rapidly with an expected CAGR of around 10 percent over the next five years as the government continues to invest heavily in sports structures and expand the country’s transportation network. Through the last few years of rapid development in China, the use of architectural membranes is becoming saturated in first-tier cities and main demand is already shifting towards second-tier cities, where there are much more new projects that can take up this product. Together with the potential future applications of fabric structures and the government’s incentive for a greener country, the prospects for architectural membrane are looking very optimistic.