Today, mainly European countries are importing goods worth millions and millions of US dollars every year. However, some countries are struggling to hold back some production. For example, Made in the USA, Swiss Made, and many other examples show the efforts to keep some business in the country. This is not an easy task, mainly because labor costs are far higher that in countries such as China or Bangladesh.

Made In Switzerland …
One of these former textile countries is Switzerland. After World War II, there were more than 50,000 people working directly in the textile industry, today there are not more than 12,500. Switzerland remains an important country for textile machinery and some outstanding technical textiles, but certainly not for apparel. However, one very traditional textile company is trying to swim against the current  — the Schild Group, a fashion house that is implementing a very interesting project that could be of interest to many other Western countries.

… As Much As Possible
In 2012, Schild launched a brand called “Schild since 1922” to recall the tradition of the house and its foundation 92 years ago. On the other hand, it should also help to expand the range of apparel of Swiss origin. The company, based in Lucerne, comprises 720 employees and netted a consolidated turnover in 2013 of 189.3 million Swiss francs (US$213.3 million) and derived a cash flow of 12.7 million Swiss francs (US$14.3 million). The Schild Group has retail shops all over Switzerland — including 30 fashion houses, four outlets, 22 branded shops and 14 boutiques.

Schild was founded in 1922 by Swiss weaver Adrian Schild. Over the years, the enterprise shifted from a weaving mill with a few retail sales outlets to a renowned menswear company. Over time, the weaving mill evolved to become a manufacturer of fine fabrics and menswear with many retail stores in Switzerland, and became finally the Fashion House Schild — domestically, a very popular ladies- and menswear specialty shop.

From Tradition Into The Future
The new branding is a strategic project for Schild. Schild since 1922 should improve the company’s position and visibility in the market and contribute to increasing the number of regular customers. For this project, profiling is rather more important than profitability, implying that the calculated selling prices are very tight and will bring less profit. Company management accepts this situation; however, it expects that money can be earned with the new products. Currently, the range of the new line includes shirts, polo shirts, sweaters and ties. The concept of the new line is based on the local textile industry’s capability of replacing or substituting for imports, which had previously been made in Asia, at least partially.

The generated revenue so far — just under 1 percent of group revenue in 2013 — is marginal. However, the dynamism in the development of the new line is considerable. This year, company management expects a 23-percent growth rate; by 2015, it should be 25 percent.

Therefore, it is of utmost importance to emphasize the less visible, but very important characteristics of the premium products: top-quality cotton, heat-set buttons that won’t fall off, metal reinforcement of the collar points instead of plastic inserts. The target, according to Schild, is to convince the buyer that these extras justify the higher price of the shirt. A lot of the hoped-for success depends on a very smart marketing plan.

Traceability
Private-label products account for about half of the entire product range. Schild already started reshoring the procurement of private-label products even before the launch of this new Swiss-made line. From 2008 to now, the share of Far Eastern purchasing has been reduced from 28 to 13 percent. Thus, the purchase prices indeed have risen; however, the greater proximity to the supply sources provides the advantage of reacting quickly to any new fashion trends. Even the value chain is easier to control — which, according to Schild CEO Thomas Herbert, has become more and more important in view of the increasing consciousness of the buyers, who want to know the conditions under which the product was manufactured.

The plan is to continuously expand the product range by adding pants, jackets, and suits. Moreover, the range of ladieswear will be extended. In the long term, the target is to achieve a future turnover of some 3 million to 5 million Swiss francs (US$338.2 million to US$563.6 million) with the 1922 brand.

Pros And Cons Of Tricky Pricing
Pricing, however, is a tricky endeavor. The products, of course, are more expensive than the usual mass-produced goods. Shirts and sweaters cost 149 Swiss francs (US$168), and ties will be 129 Swiss francs (US$145). The articles will have a more timeless style than fashionable mass-produced products and can therefore be kept for several seasons, which can be used as an argument to justify the relatively high price. However, Herbert said, “It’s not possible to place the range in a luxury segment.” To promote the new line, the price had to be kept under the crucial barrier of 150 Swiss francs (US$169). Yet, this pricing needs a considerable turnover. With a more expensive product, it might be possible to achieve more sales, but at a lower volume, and this was not the intention of the management. Another idea of this strategy was that the conscious tightly budgeted margins would prevent competitors from starting in the “Swissness” business with lower prices.

An Experiment
The launch of the new brand must be regarded as an open-ended experiment. On the other side, it is unclear whether the Swiss textile industry has the capacity and quality to fulfill the target of selling a “full Swiss product.” So far, the value chain of the targeted products is only two-thirds in Switzerland. There are plans to shift more work processes into Switzerland, but the limited number of suitable producers will likely be an obstacle for a long time. To be continued … 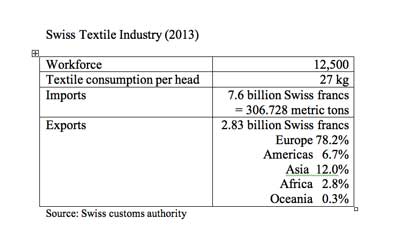