MILAN — February 6, 2015 — For the textile machinery sector, the year’s fourth quarter resulted in a decline in orders, mainly due to a negative performance recorded in foreign sales. These findings have been reported in an economic survey conducted by ACIMIT, the Italian Association representing the industry, indicating a 4% drop over the previous quarter. The value of the orders index for the period from October to December 2014 came in at 85.0 points (basis: 2010=100).

This decline in the index can be blamed on the overall negative performance recorded for this period in markets abroad, where orders effectively came in at an index value of 92.7 points (-6% over the previous period). On the other hand, domestic orders rebounded compared to the third quarter (+34%), for a value of 50.8 points.

ACIMIT President Raffaella Carabelli explained the positive data for the domestic market, “The growth in orders in Italy over the last segment of 2014 appears to be a good sign for 2015, during which we will reach an apex with ITMA, the premier trade fair in the industry, to be held in Milan from the 12th to 19th of November. This climate of greater confidence at a macroeconomic level seems likely to become contagious for various sectors of our economy,” continues Carabelli. “I’m certain that the entire textile industry can benefit from the current global economic trends, and I’m referring especially to the weaker European currency and lower interest rates.”

Optimism is the key word for Italy’s textile machinery sector on the eve of hosting ITMA; a sense of optimism that is already evidenced by the event’s updated figures. Indeed, the Milan edition will exceed the 100,000 sq. meter threshold (the previous edition held in Barcelona in 2011 covered 80,000 sq. m of exhibition space). By end of January, 388 Italian exhibitors had confirmed their commitment to participate in the event, out of a total of 1500 participants, for an overall growth in acquired exhibition surface area of 48% compared to the previous edition. Lastly, requests for increased exhibition space already optioned and demands put forward by new exhibitors continue to pile into an already crowded waiting list. 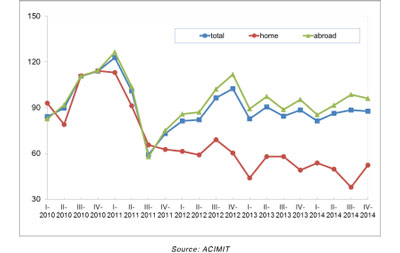