BIRKENHEAD, United Kingdom — August 22, 2013 — The prospect of a record crop in India, which has
benefited from timely and plentiful Monsoon rains, has resulted in an overall increase this month
in Cotton Outlook’s world production forecast for the 2013/14 season. The gain for India (which
could still prove to be an underestimate) more than offsets a further reduction for the United
States, where drought has limited production in West Texas, and too much rain has dented prospects
in the South Eastern states.

Although some retrospective adjustments have resulted in changes to Cotton Outlook’s
consumption data, the gain in consumption between 2012/13 and 2012/14 is still projected as a
rather pedestrian two percent. The cotton textiles sector in China continues to be hampered by the
government’s cotton policies, and recent economic developments in India and certain South East
Asian countries have been far from helpful. 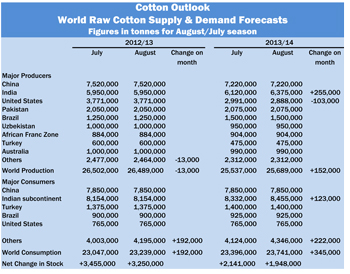 Click
here to view the table in a new window