The Netherlands — July 9, 2013 — Air France-KLM will further cut tonnes from its annual aircraft
carbon dioxide emissions, simply by using revolutionary new lightweight cargo nets that it is now
introducing. Just one new lightweight net with Dyneema® will save Air France-KLM-Martinair Cargo
over 210 gallons of kerosene fuel per year. That means CO2 emissions will be over 2.5 tonnes less
per net per year.

The first nets, made with ultra high molecular weight polyethylene (UHMwPE) fiber,
manufactured by DSM Dyneema and branded as Dyneema®, were formally handed over at Schiphol airport
in Amsterdam on July 9th.

Produced by AmSafe Bridport, world leader in aviation restraint technology, the nets will in
future be used on all aircraft operated by Air France-KLM-Martinair Cargo, the dedicated air cargo
business of the Air France-KLM Group. It is the first major airline group to replace all cargo
pallet nets, normally made in polyester (PET) fiber, with lightweight nets made with Dyneema. 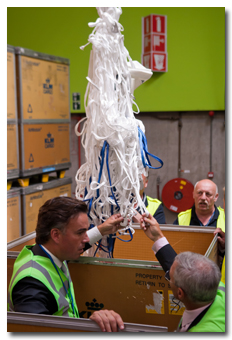 Air France-KLM-Martinair Cargo, AmSafe Bridport and DSM have been collaborating on
development and testing of the lightweight nets for several years. They have succeeded in producing
nets that weigh around 9 kg, which is half the weight of a traditional net in PET fiber. Air
France-KLM-Martinair Cargo has now recognized Amsafe Bridport and DSM as preferred suppliers of
sustainable aircargo solutions. Tuesday, July 9, Atzo Nicolaï, President Netherland of DSM, and Ian
Kentfield, President of AmSafe Bridport, handed over the first revolutionary lightweight cargo net
to Camiel Eurlings, CEO of KLM.

“We are proud to be the first major airline group to introduce light weight nets with
Dyneema,” said Camiel Eurlings. “At Air France-KLM, we are fully committed to reduce our carbon
footprint, and our efforts are being recognized. For the eighth year running, Air France KLM has
come out at the top of the Dow Jones Sustainability Index in the airline sector.”

“Weight reduction on board our aircraft is an important part of those efforts. These
lightweight nets can lead to important reductions in greenhouse gas emissions, and are the latest
in a series of efforts we are taking to reduce our carbon footprint.”

Important too is the fact that lightweight nets with Dyneema mean operatives can handle them
more easily and safely. Furthermore, the nets are more damage-resistant than polyester nets, and so
require around half as much maintenance, which is a significant saving. “That’s what I call a
win-win-win situation,” concluded Eurlings.

AmSafe Bridport’s Ian Kentfield highlighted the collaborative efforts between the three
companies that had made possible such an important step forward in reducing aircraft emissions.
“Delivery of a new product to a customer requires a good in depth understanding of their needs and
requirements,” he said.

“We have worked closely together for seven years to ensure this product meets Air
France-KLM’s needs operationally, financially and aesthetically, and that it can fulfill the
performance criteria of a cargo pallet net for its entire five- year lifetime-which is 60% longer
than rival products.”

Atzo Nicolaï from DSM said that the new nets provided an excellent example of DSM’s use of
“bright science to create brighter living,” and its spirit of collaboration with industry partners.
“We are very proud that Dyneema, with its characteristic very high strength and low weight, has
such a great impact on the planet and on people, as well as our customers’ profit,” he said.
“Sustainability is key, and the reductions in emissions that Air France-KLM will achieve are very
impressive.”