In other news, Mohawk reported its SmartStrand™ carpet made with DuPont™ Sorona® polymer has
been well-received. The carpet is targeted to middle-to-high-end markets. The company plans to
introduce new SmartStrand products by year-end. 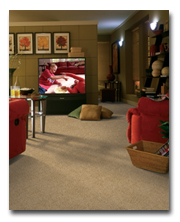 The company also announced it has agreed to acquire Unilin NV, a Belgium-based manufacturer
and marketer of laminate flooring products.