Ludlow Textiles Co. Inc., founded in Ludlow, Mass., in 1868, has operated continuously for 135
years. In its early days, then-Ludlow Manufacturing Associates employed 5,000 people in 1.5 million
square feet of space and was known as the largest jute mill in the world. Prior to World War II, it
produced jute gunny sacks and grain bags; cotton baling, twine, webbing and yarn; and linen
threads. Ludlow came under its current ownership in 1983. Today, it operates out of one of the
original factory buildings as a state-of-the-art facility, manufacturing industrial cords, tapes,
threads, twines and yarns. The company was the first industrial thread manufacturer to achieve ISO
9001 registration for its entire process. 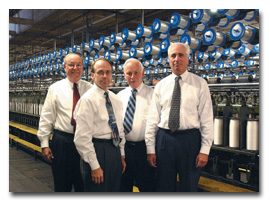