Machines Italia: Dyeing And FinishingInnovations from Brazzoli S.p.A. focus on the Innodye®.
At the heart of this technology is the development of a perforated basket that moves side to side
as the fabric advances into the dyeing machine through the Turbovario, a variable conical
cross-section venturi. The J-shaped baskets motion plaits the rope of fabric as it moves from the
top of the machine into the immersion area. The motion is synchronized automatically with the
fabric driving wheel, which maximizes the space in the machine, and according to the company,
increases repeatability and reduces foam formation. Maximizing the load size also maximizes the
interaction between the dye or treatment bath and the fabric, reducing pilling and cycle time.
Dyeing of 100-percent cotton using a reactive dark dye can be reduced from five hours to roughly
three hours, while cotton/polyester dyeing can be reduced from six hours to four and one-half
hours.The machine is available in a modular construction and can be run coupled or uncoupled.
Because of its load efficiency and flexibility, INNODYE also is used in bleaching.Robotized Dyeing
SystemsObem S.p.A.s technology focuses on dyeing systems created in modular form that facilitate
flexibility and versatility by modifying lot size all with a positive environmental impact.
Flexibility is evident in the design of a four-unit, 250-kilogram (kg)-per-unit machine that can
run in a 1,000-kg mode or a 250-kg mode, allowing the textile manufacturer to adapt to business
conditions.The companys latest technology is most apparent in the TMB/SV-tr, a fully robotized
skein-dyeing system. Using a specially designed spray hank arm, the hanks are processed without
tension. The system is particularly suited for fine or soft yarn. When asked about the success of
placing its automated systems in China, Obem pointed to the recent opening of an installation of a
fully robotized, pressurized skein-dyeing system and noted the automation was for quality purposes.
For fabric dyeing, Obems sister company, Maibo, features the Medusa, an overflow machine with two
baskets. It differs from a typical system, which uses the liquor to push the fabric, by using
multiple injection points, floating the fabric in the baskets and using a reel to move the fabric.
The Medusa is finding a niche in knits and elastic fabrics manufacturing, where reduced stress is
important. 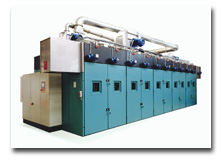 The Spyra tumbler from Biancalani handles fabric in rope form.Adding ValueTechnology that
adds value to fabrics is at the heart of Biancalani S.p.A.s technology. Popular with fabric
finishers around the world, the Spyra and Airo® machines have added options affecting both fabric
face and hand. The Spyra is a continuous tumbler that handles the fabric in rope form. Fabrics can
be padded prior to entering the machine. The fabric is winched and carried into each tumbler
section with a large quantity of injected high-pressure air. In the first six of 10 positions,
steam also can be injected for additional finishing effects. A cool air stream feeds the fabric
into the final two tumblers to complete the process. The perforated tumblers are large enough to
avoid knots, and feed collection pans with load cells signal the pace for the upcoming section.
Depending on the process, fabrics are bulked and dry-softened, adding value by improving hand in a
range of products from knits to upholstery.The Airo system is a discontinuous machine for washing,
softening and drying knits and woven goods in rope form. This technology links the high-pressure
air-carrying system for fabrics with an impact against a contrast grid. Machine versatility
accommodates extremely delicate to very aggressive cycles. The fabric impacts the grid in a
predominately open manner because of the air pressure in the ejectors, ensuring processing without
stripes, abrasions or creasing. In wet processing, this increases penetration of treatment bath
chemicals as they physically pass through the fabric. The Airos ability to modify surface and hand
in a range of products, from apparel to home furnishings, has made it a versatile tool in the hands
of finishers.Building SynergiesTechnology at Leopoldi Pozzi S.p.A. and Pozzi Elettronica S.p.A. has
focused on nine product lines and in building synergies with others to market its products
globally. Four completely new machines related to hydroextraction and automatic powder weighing
will be shown at ITMA 2003.The AQuafix brQ vacuum steaming machine offers a modular cube form that
allows loading of up to five pallets at a time. When fully loaded, 3,500 kg of yarn are processed
in each run, which takes about 45 minutes. The result is a minimal environmental footprint,
efficient use of head space and high productivity. Pozzis SynchroWash system for wash water control
on air-pad dyeing machines, introduced in 1999, will be further improved this year. Rather than
using the popular fill-drain-fill-drain sequence adopted by many to save wash water, SynchroWash
continuously drains the dirtiest water and allows filling only when the spent water is sufficiently
concentrated. Pozzi claims a 60-percent reduction in wash water usage and energy consumption, as
well as a 30-percent reduction in cycle time for reactive dye cycles. Pozzi Elettronica will be
present at ITMA 2003 showing the latest version of its Saltex, a system for dosing up to five
different salts to a large number of machines. MCS GroupThe MCS Group comprises MCS Officina
Meccanica S.p.A., a dyeing and finishing machinery manufacturer; Termoelettronica S.p.A.,
manufacturer of automatic dosing and dispensing systems, microprocessor controls and dyehouse
management systems; Europea, a commission dyehouse using MCS machines; and Europizzi, a commission
dyeing and printing plant and chemical products manufacturer. Turnover in 2002 was in excess of 130
million euros. The Multiflow® single-rope jet-dyeing machine is an MCS exclusive. This concept
allows movement of a single rope from chamber to chamber. In a three-chamber machine, goods loaded
into chamber one move to the bottom of chamber three, then into chamber two, and back to chamber
one. There is no longer a favorite chamber (closest to the pump) or a disadvantaged chamber
(farthest from the pump). Fabric passes through all the chambers, so there is no need to extend
dyeing times to wait for all chambers to reach the proper shade. Dye and salt are added as quickly
as possible over four to eight turnovers. The new hydrovario jet nozzle, which uses a stepping
motor, is the first in the world that allows change in jet pressure without changing diameter. Dye
cycles for reactive dyeing on 100-percent cotton have been shortened to less than four hours. Since
1998, more than 760 Multiflow machines have been sold worldwide. 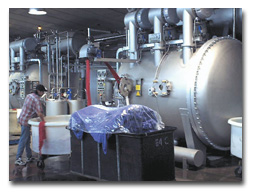 The Multiflow jet-dyeing machine from MCS Officina Meccanica features three chambers to
provide quick and level dyeing.In the United States, more than 15 installations of MCSs Superdome
carpet beck have been installed in six dyehouses. Maximum capacity is 3,500 pounds per load.
Another innovation is the Termoelettronica TERMOdye vacuum dosing system. Scale development has
allowed vendors to claim accuracy of ±0.01 gram. However, with small dosing and use of powder dyes,
dye is often lost to the air during transfer. The enclosed vacuum system ensures complete transfer
of all dosed dyes.Indigo DyeingWhile US manufacturers tended to install large indigo ball
warp-dyeing ranges to supply the commodity market, Master S.a.s. di Ronchi F.& C. began several
years ago to work closely with fashion-oriented European denim manufacturers. Master developed its
Indigoflow technology by producing a warp-dyeing machine equipped with patented devices, such as
special pad troughs with optimized shape and efficient double-flow bath circulation, and Twinflow
vats to improve dyeings when using dyestuffs other than indigo. Pure indigo baths can be circulated
from a make-up tank, and the machine is equipped with a second separated circulation system to
allow colored denim using sulfur, vat or reactive dyes without danger of pollution among different
dyestuffs. Indigoflow also can be equipped with steamers for better dyeing performance in color
denim bottoming and topping; intermediate dryers for producing reliable reactive and indanthren
dyeings, and several other options suitable to follow market demands.Package Dyeing SpecialistThe
introduction by Loris Bellini S.p.A. of the RBNO horizontal package-dyeing system at ITMA 1983
swept the yarn package-dyeing world. Since then, Bellini has become a specialist in the development
and optimization of package dyeing. Innovations include an interchangeable dye carrier that allows
dyeing at almost constant and optimal liquor ratios, with packages that vary from 150 to 300 mm in
diameter. Over the past 10 years, the outside diameters of average cotton packages have increased
from 165 to 215 mm, and are up to 245 mm for fiber-reactive dyeing. To handle the additional
pumping capability required to uniformly penetrate these larger distances, Bellini developed a
heliocentrifugal pump with a combined impeller axial and centrifugal pump on the same shaft to
cover the differential pressure range from 0.3 bar to 1.7 bar. The same pump system can now handle
high-permeability packages such as wool and acrylic, as well as dense cotton, viscose and Tencel®
packages. The RBNO control system can be equipped with a magnetic on-line flowmeter to ensure
constant specific flow rates or bath turnovers per minute.
June 2003