Technology: SpinningBy William Oxenham, Ph.D.Developments In Spinning
An overview of yarn formation technologiesDuring the 1970s, there appeared to be a myriad
of spinning systems, such as twistless spinning, self-twist spinning, fasciated yarns, composite
yarns, wrap-spun yarns, pot spinning, continuously felted yarns; and the many possible variants in
open-end spinning such as rotor, electrostatic, friction spinning, and vortex spinning (the
original Polish system). At the same time, there were continued developments in ring spinning, with
ventures into rotating ring and traveler systems, individual spindle drives, high draft systems,
modified travelers, double roving spinning, and hybrid systems.A look at todays industry reveals
that while some systems have established a successful but small niche wrap spinning for fancy
yarns, and friction spinning for specialty industrial markets very few systems have survived.
Indeed, this is also true of the manufacturers of these machines.Figure 1 represents the current
offerings in spinning machines and their comparative spinning speeds. Table 1 summarizes the number
of spinning positions for the major technologies, together with their share of the spun yarn
market. It is evident that, when judged from the perspective of the number of installed spindles,
ring spinning is still the most dominant spinning system there are about three times more spindles
than installed rotors. If judgment is based on the quantity of yarn produced, it is clear that even
though there are only one-third as many positions of rotors installed, rotor spinning produces
three times more yarn than ring spinning. 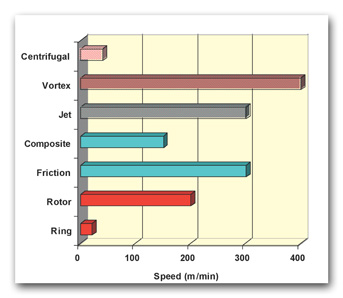 Figure 1: Potential short-staple spinning systemRing SpinningThe technology behind ring
spinning has remained largely unchanged for many years, but there have been significant
refinements. Changes, which on their own offered only slight advantages, provided the following
synergies when combined:The introduction of longer frames reduced the relative costs of automatic
doffing.The combination of spinning frame and winding (link winders) further enhanced the adoption
of automation.The introduction of automatic doffing meant that doffing time was reduced and thus
package (and ring) size was less critical.The introduction of splicing on the winder meant that
yarn joins became less obtrusive again offering the potential of smaller package.Smaller rings
meant that for a limiting traveler velocity (40 meters per second [m/s]), higher rotational speeds
(and hence twisting rates) could be achieved.These combinations meant that the potential maximum
speed of ring spinning was raised from about 15,000 to 25,000 revolutions per minute. There also
have been several other proposed developments that have met with mixed success. Drafting systems:
While double apron drafting dominates, the system can be tweaked to enable higher drafts. Recent
exhibitions have featured machines operating at potential drafts of 70 to 100. The use of high
drafts has significant impact on the economics of the total system. Individual spindle drives:
Several manufacturers demonstrated this possibility in the 1980s. While the concept offered
advantages with respect to lower energy requirements, less noise and better control of speed, it
suffered higher initial costs and bigger spindle gauge.Ring DesignSeveral approaches to reducing
the limitations of traditional rings and travelers have been proposed. Orbit ring: This development
from Rieter was aimed at increasing heat dissipation from the traveler.Ceramic rings (Ceratwine
system): The combination of a ceramic ring and ceramic-coated traveler offered the promise of
significantly better wear resistance, which translates into long traveler life. More consistent
yarn quality and shorter break-in time are other claimed benefits.Rotating rings: This idea was
tried by several ring frame manufacturers in the 1970s. Other ventures into this area included
systems such as Cerifil, Magnetic Spinning and Super Traveler Spinning. The problem with these
types of devices is, while they appear to operate at lower spinning tensions, and thus potentially
offer lower end breakage rates, they suffer the drawbacks of short duration and high-magnitude
tension peaks because of the inertia of the twisting element, which is significantly higher than a
traveler. Spindle identification (Schlafhorst, Barco): The tracking of spindles from the ring frame
has great potential for process quality control. This enables the identification of those spindles
on the ring frame that are responsible for producing defective yarns, as assessed on the winding
frame. It is believed this type of system will result in improvements not only in yarn quality, but
also in efficiency, by more readily indicating faulty positions on the spinning frame.Longer
machines: Improvements in the drives used on spinning frames have enabled the number of spindles
per machine to be further increased up to 1,488 (Zinser). This has a positive impact on the cost
per spindle. Additionally, as indicated above, longer machines favor the use of automation,
particularly link-winding. Compact spinning: Systems that use additional drafting components and
pneumatics to create yarns that are less hairy and stronger are available from several machinery
makers. The many claims made for these systems are usually mutually exclusive in that one can
either have a stronger yarn or spin at higher production speeds with lower twist. Moreover, there
is a significant increase in the cost of these machines, and the yarn thereby produced, when
compared to traditional spinning frames. While the use of compact spinning machines is claimed to
have made significant inroads in Europe, the system has not been well-received in the United
States. It is evident that several other machinery makers will venture into this market, such as
Marzoli and Cognetex, and this added competition may result in reduced machinery costs.

Rotor SpinningRotor or open-end spinning is now a mature technology, and since the
1960s, it has seen a five-fold increase in twisting speeds. During the early stages of development,
debates concerned such questions as:Were self-pumping or evacuated systems betterWas roller
drafting feed superior to a beater openerWas spin through better than feed and withdrawal from the
same face of the rotor Were twin disc bearings the best solution for higher speedsThese issues were
seemingly resolved, and most modern rotor machines are very similar in layout with relatively
subtle differences between machines from the major manufacturers. These differences are typically
associated with the aerodynamics of the transfer tube, rotor design and navel design.While it is
still possible to obtain low-tech rotor spinning frames, present state-of-the-art machines have
significant integrated automation such as doffing, piecing, cleaning and process/product
monitoring. Additionally, the machine can be part of a material handling system from sliver through
to packaged yarn. It is generally accepted that, while rotor yarns are different from ring-spun
yarns, they tend to offer advantages in processing through weaving and knitting. This difference is
a result of structural differences introduced during yarn formation. This structure which is
responsible for the lower strength of rotor yarns, but improved hairiness and yarn abrasion is an
inherent feature of the system. While it is possible to control the formation of wrapper fibers by
optimizing rotor and navel designs, it is impossible to eliminate them. Unfortunately, while
smaller rotors are required for higher processing speeds, this also negatively impacts wrapper
fibers, and thus higher speeds often carry the penalty of a reduction in yarn quality. Developments
in rotor spinning include the use of longer machines. Additionally, there is interest in
potentially using rotor technology to produce core yarns and using additional components to create
effect yarns.Fasciated YarnsWhile initially there were several potential manufacturers of machines
for this technology, the market has been dominated by Murata, with its jet spinning and vortex
spinning systems. Murata Jet Spinning (MJS) gained a small, but significant, share in the
polyester/cotton yarn market. The advantage of the system was that it offered high-speed production
of finer-count yarns and thus did not directly compete with rotor spinning. Since its commercial
launch as MJS, several variants have been introduced, including Murata Twin Spin (MTS) and Roller
Jet Spinning (RJS). Different jets also were offered to accommodate different yarn styles. These
offerings were to extend the use of jet spinning, with particular respect to fiber type and yarn
count. Jet spinning has the major disadvantage of not being able to produce acceptable 100-percent
cotton yarns. Furthermore, MJS is restricted to finer counts because yarn tenacity reduces as the
yarn becomes coarser. For optimum processing, there also are higher quality requirements on the
feed sliver with extra drawing or combing operations. Despite these limitations, and the necessity
to optimize finishing in order to promote an acceptable hand, jet spinning is a viable system in
the United States because of high productivity 250 meters per minute (m/min) for the MJS 802H and
adequate yarn and fabric quality. As a bonus, the core sheath structure of the yarn tends to
minimize hairiness, which in turn reduces pilling propensity, often a major problem with
polyester-rich blends.Murata Vortex SpinningMurata Vortex Spinning (MVS) is best judged as a
development of jet spinning specifically created to overcome the limitations of fiber type. The
major marketing feature of MVS was that it was capable of spinning uncombed cotton slivers into
acceptable yarns at speeds that were significantly higher than with any other system. The yarn
structure is different from jet-spun yarn with many more wrapper fibers, and in parts the vortex
yarn resembles a two-fold yarn. There were concerns that there is excessive fiber loss using this
spinning machine. But, even though the fiber loss may be about 8 percent, most of this is short
fiber, which would not contribute to yarn quality. MVS was introduced with a remarkable potential
processing speed of 350 to 400 m/min. Successful spinning systems historically have had a
significant increase in production speed within a few years of introduction. If this trend were to
be true of MVS, it is possible that the industry could have a staple spinning frame capable of
speeds in excess of 500 m/min.Even though it is claimed that MVS is capable of processing
100-percent cotton, it is believed that the major use of this system is in the processing of
cotton-rich blends with polyester. The machine utilizes a roller drafting system working at high
drafts and high speeds. There is proof that indicates these systems may give rise to unacceptable
yarn variations, which become apparent in terms of fabric defects or weak spots in the yarn. This
is a problem that could be addressed by using the rotor spinning beater opener. New developments
likely for MVS include modifications to enable the production of coarser counts and a possible
re-examination of the concept of spin assembly winding, where yarns from two spinning positions are
combined onto one package that is subsequently two-for-one twisted. It is also evident, from a
cursory review of patents, that other machinery makers have invested in significant research into
technology similar to vortex spinning and perhaps there soon may be alternative machines
available.It is clear that at the present time, there is a lull in investment in new spinning
machinery in the United States. This could be explained partly by a downturn in the industry, which
seems to be supported by the reduction in positions shown in Table 1, and partly by the fact that
the current technologies are mature. 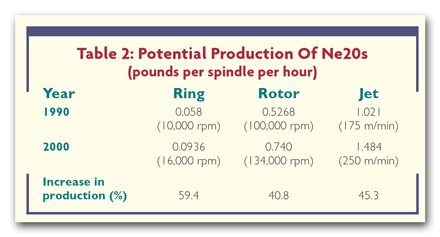 Source: Everette Scarboro W. Schlafhorst AGandCo.An additional factor in this consideration
is that as spinning machines become more productive, the number of machines needed to satisfy a
particular market will decline. It is quite evident from the data shown in Table 2, that among all
the major spinning technologies used in the United States, there has been a very substantial
increase in productivity over the past 10 years. The table does not include the impact of changing
from jet spinning to vortex spinning, which would show an even greater increase in productivity for
this type of yarn.
Editors Note: William Oxenham, Ph.D., is associate dean for academic programs at North Carolina
State Universitys Department of Textile and Apparel Technology and Management, Raleigh, N.C.
Oxenham received both a B.Sc. and Ph.D. from the University of Leeds, England, and is regarded as
an international expert in the area of yarn manufacturing.