Earnings before interest, taxes, depreciation and amortization (EBItdA) including Cone’s
share of profits from Parras Cone, its joint venture in Mexico, totaled $14.8 million for the
quarter and $58.6 million for the year.

“[The year] 2002 fulfills the commitment that we made last year to return Cone Mills to
profitability and achieves our $50 million EBItdA goal set two years ago,” said John L. Bakane,
CEO.

Gary L. Smith, CFO, noted that Cone reduced debt by $29 million and improved its
debt-to-EBItdA ratio to 2.9. “We continue to operate with daily liquidity of more than $20
million,” he added. 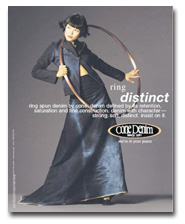 Cone Mills’ fourth-quarter 2002 profit was driven by a 31.1-percent increase in denim sales
over year-earlier sales.