Man-Made FibersBy John E. Luke Upon Further Review…
A closer look at man-made fibers yields changes within the market. Recent data from
the Fiber Economics Bureau has highlighted trade patterns in fibers, yarns and threads among NAFTA
trading partner countries. On the surface, the data appears to demonstrate how well U.S. fiber
producers are performing in the regional atmosphere created by NAFTA. Deeper down, however, the
statistics may also suggest impending changes in the U.S. textile complex.Is U.S. fabric
manufacturing moving to Mexico How different is that from the industrys move from its New England
base to the South after World War II Are U.S. and world fiber producers following this trend and
what impact will this geographic change have upon the U.S. fiber industry and the U.S.
textile/apparel complex. Several U.S. mills recently announced closings or restructuring. We
continue to hear reports of offshore investments in Mexican fabric production suggesting that
non-NAFTA nations may have discovered a Mexican investment strategy which gains them NAFTA status
while nominally owned by non-NAFTA organizations.Since the Mexican fiber industry is not yet large
enough to support reported Mexican fabric production, logic fails, however, when applied to
non-NAFTA investments. The world fiber industry may benefit through increased sales and the
consumer may benefit through lower prices from the availability of low-cost fibers but the U.S.
textile apparel complex may lose with profit repatratition to non-NAFTA nations.On the surface, at
least, a pattern with implications for a western hemisphere trading bloc seems to be emerging.
NAFTA appears to be successful in its original goal of slowing Far East imports, but its success
hangs another bloc out to dry. Granting NAFTA status to the Caribbean Basin nations would solidify
the mid-western hemisphere trade laws and create a unified fiber, fabric and garment zone in which
U.S. produced material would not be at a competitive disadvantage.It also would send a message that
the U.S. is serious about international business and we look to expand NAFTA theory south. The
first step is competitiveness in the NAFTA arena; second, the western hemisphere and third, the
world. Trade StatisticsIn 1996, U.S. fiber producers exported 1.23 billion pounds of
fiber/yarn and threads. Exports fell by 11+ percent to 1.09 billion pounds in 1998.Similarly, U.S.
mills imported 1.20 billion pounds of the same materials in 1996 but, as has been well documented
in the trade press, by 1998, imports had exploded by almost 30-percent to 1.57 billion pounds.Table
1 details recent changes in the trade balance of fiber/yarn and threads. The Asian flu absolutely
overwhelmed U.S. exports, particularly in polyester filament and staple fibers. Filament swung 126
million pounds from a positive net trade balance of 112 million pounds in 1996 to a negative
balance of 14 million pounds. Foreign sources of staple continued their onslaught and almost
doubled the 1996 negative trade balance of 227 million pounds to 441 million pounds.Hidden in these
frightening statistics, however, are several trading trends which deserve mention since they may
presage fundamental changes in western hemisphere fiber, fabric and apparel manufacturing. 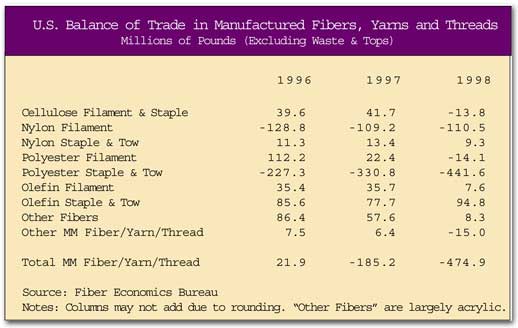 ExportsWe previously have reported in this space on the export positive trade balance
history of the American fiber industry. Obviously, this pattern had been shared but it took as
dramatic an act as the Asian meltdown to finally drive U.S. fiber trade into the deficit column.
Importantly, however, of the 1.23 billion pounds of 1996 exports, 302.4 million went to Canada and
139.7 went to Mexico.Our NAFTA partners imported 442.1 million pounds of fibers/yarns and threads
from us, almost 36 percent of our fiber/yarn and thread exports with Canada at 24.5 percent and
Mexico at 11.3 percent. By contrast, in 1998, as western textile economics were shoveling out from
under the blizzard of cheap southeast Asia fibers, U.S. fiber producers still managed to export
almost 1.1 billion pounds, with the NAFTA partners taking almost 50 percent of the total; Canada
taking 340 million pounds representing 31+ percent of out exports and Mexico taking 201 million
pounds representing 73 percent of total Canadian fiber imports, down slightly from the 76 percent
level of 1996. Similarly, Mexicos 201-million-pound fiber intake from the U.S. in 1998 represented
70-percent Mexican fiber imports, down substantially from 81 percent in 1996.Half of the
137-million-pound export losses between 1996 and 1998 can be accounted for by missing opportunities
in Mexico, probably to cheap Asian fibers aimed at reshipment from Mexico to non-NAFTA countries.
The other half was lost among a myriad of U.S. trading partners also to cheap Asian fibers
available worldwide at any price. An incremental analysis reveals that U.S. producers were forced
to find ways to affect this dramatic increase in market share with NAFTA partners. For example,
(using 1998 shares as a starting base) if 31+ percent of 1996 shipments went to Mexico, 1996
exports to NAFTA countries would have been slightly more than 608 million pounds. Since 1998
shipments only were 541 million pounds, the industry appeared to lose 67 million pounds in NAFTA
shipments only were 541 million pounds, the industry appeared to lose 67 million pounds in NAFTA
shipments in the two years.It is problematic whether the industry can continue to repeat this feat
although improving southeast Asian economies should reduce the pressure on international
accumulation of hard currencies which thereby should reduce exports of exceedingly cheap raw
materials. Imports1998 represented a high water mark for fiber imports, driven by dramatic
increases in the imports of polyester staple and filament from Korea, Malaysia, Indonesia and
Taiwan. Most dramatically, Korea increased fiber shipments from 237 million pounds in 1996 to 395
million pounds in 1998 a 66-percent increase in two years raising their share on U.S. imports from
slightly less than 20 percent to slightly more than 25 percent.Taiwans share of U.S. imports grew
44 percent from 7.4 percent to 10.7 percent. Similar but slightly smaller moves were made by
Malaysia and Indonesia, neither of whom could match the sheer volume of polyester fibers available
from Taiwan and Korea.NAFTA continued to provide opportunities for competition, however. As with
U.S. exports, so also with shipments to the U.S. Of 1996s total U.S. fiber/yarn and thread imports,
41 percent, 501 million pounds came from NAFTA countries, split 60/40 between Canada and Mexico.By
1998, total exports to the U.S. had increased slightly to 533 million pounds, still were split
60/40 in Canadas favor and represented only 34 percent of total U.S. fiber/yarn and thread
imports.It will be interesting to observe DuPont-Akra in this import deluge. The combined
American/Mexican company already can supply 750 million pounds of polyester staple, is building 350
million pounds of production in Mexico and has also announced the intention to double the Mexican
facility by an undetermined time in the 21st century.If NAFTA, and potentially CBI, can continue to
stave off Asian imports, we will see significant quantities of DuPont-Akra staple in U.S. mills
and, at least superficially, U.S. fiber producers will appear to suffer at the hands of
impostors.To establish a perspective, Table 2 details the U.S. balance of trade in manufactured
fibers/yarns and thread with NAFTA partners.In 1998, U.S. producers exported a total of 1.1 billion
pounds of fibers, yarns and threads. Fabric manufacturers imported almost 1.6 billion pounds of the
same products, resulting in the 475 million pound trade deficit.As recently as 1996, the U.S. fiber
industry maintained a net zero balance of trade by exporting as much as was imported in fiber form.
As we have noted in their space, the U.S. fiber industry almost always has been a net exporter but
it finally has been overwhelmed by the proliferation of fiber manufacturing facilities,
particularly in developing economies.NAFTA has been good for U.S. producers. As seen in Table 2,
the U.S. shipped 26 million pounds more into Canada than was imported and shipped 13 million less
into Mexico than was imported. U.S. producers now maintain a net zero balance of trade with its
NAFTA partners by exporting as much as was imported in fiber form. U.S. producers must fight to
maintain this trade picture and should endorse any policies which can enhanced the competitiveness
of a western trade bloc.