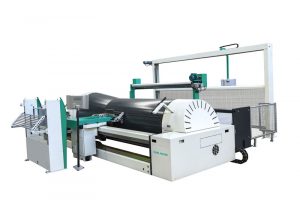 OBERTSHAUSEN, Germany — April 21, 2021 — In spring 2015, KARL MAYER’s warp preparation customers in India had two highlights to look forward to: the global player celebrated the start of production at its new plant in Ahmedabad by launching its new ISOWARP sectional warping machine at the same time. A few years later, the state-of-the-art factory run by KARL MAYER Textile Machinery India Private Ltd. took over the construction of the ISOWARP for the domestic market. Being “Make in India” facilitates the shortest possible delivery times, the highest availability of spare parts and the best service quality, and is combined with all the design, quality assurance and product management expertise that the entire KARL MAYER Group has to offer. Key component parts also come from the European network to ensure the highest product quality.

The first two models were delivered to Rajapalayam Mills Ltd. in 2019 and are performing well there. “These machines are working at highest production and produce high quality warp beams, enabling the successful performance of our weaving machines. The KARL MAYER ISOWARP made in India is real value for money and is on par with the machines made in Germany,” said Mohana Rengan, the company’s COO.

This year, the innovative machine is once again playing an important role. In spring 2021, a demo centre featuring the ISOWARP as its centrepiece is set to open at KARL MAYER’s Indian site in Ahmedabad. Here, customers will be wowed by the performance of the warp preparation system and can carry out specific processing tests.

The ISOWARP sectional warping machine complements the premium PROWARP® version as a model suitable for the commodity market. Since its launch, it has been continuously adapted together with the associated GH creel in terms of structure and complexity to meet local conditions and diverse customer requirements. Nowadays, a complete family of machines is on offer. The main additions are versions offering new working widths and performance characteristics relating to beaming tensioning and warping speed, for example, which open up completely new applications. Initially designed for shirt production, the ISOWARP can now also be used for household textiles and terry cloths, and for processing filament yarns, among others.

The ISOWARP impresses with its efficiency and quality across all applications. Warp preparation productivity can be significantly increased compared to equipment using conventional counterparts. The quality of the warp beams meets the same high standards as all KARL MAYER machines. It enables an efficiency increase in the weaving mill of 2 to 6 percent, and is particularly based on high-precision band structure control, which is managed by state-of-the-art software.

What’s more, the ISOWARP requires almost no maintenance and only a few spare parts.