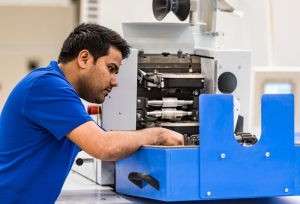 High yarn quality is becoming less and less dependent on the presence and experience of employees in a spinning mill. Nowadays, it is significantly influenced by futuristic plant solutions and intelligent machine systems. In the world of spinning, options for shortening processes, and thus reducing outlay in production, are becoming more and more relevant. One example is the IDF integrated draw frame from Trützschler which so far is superior to all competitor solutions. It can be used to combine two important aspects which currently heavily occupy the minds of our customers. For one, the shortening of processes means lower staff numbers are possible, whilst the IDF also provides a solution for tackling the increasing demand for spinning high-grade yarns from inferior raw material.

For years, Trützschler has been watching the trend that fiber lengths used in the rotor yarn sector in particular are becoming shorter and shorter. In 2003, the average fiber length for our customers’ rotor yarn installations was 28.5 millimeters (mm), today it is only 26 mm. This is a remarkable decline. The reasons for this can be manifold and may be related to cotton cultivation and harvesting methods. However, a crucial aspect is that the economic pressure on spinning mills and their production costs is increasing, leading to the use of ever shorter fibers.

Development History Of The IDF At Trützschler

It takes time for optimized processes to establish themselves on the market. This is because process shortening initially presents a challenge in the spinning mill. It must be ensured that the same yarn quality is achieved in terms of processing parameters such as strength, elasticity or appearance. In the mid-nineties, at the beginning of the IDF development, it was unimaginable that yarn could be produced from 100 percent noils, but today this is certainly the case. This is also a way for large combing mills to include their own waste in the value chain and selling it with added value. Trützschler has significantly advanced this development and implemented the IDF system in 1999, based on Spanish market requirements for the card TC 11. In the following years, it was continuously developed and improved.

In 2013 Trützschler presented a fundamental revision: The Integrated Draw Frame IDF 2. The special feature was the reduction of two drafting zones to one. Thus, the IDF 2 responds to the increasingly urgent demands of our customers for production cost reduction on the one hand and a high quality standard despite poor raw material qualities on the other. This is because only the 1-zone drafting system allows particularly low drafts, which are the decisive guarantee of success for the processing of particularly short fibers.

The main difference between IDF 1 and IDF 2 lies in the drafting system itself. Experience has shown that low total drafts are the key to success — especially with short-staple cotton, which is usually used in rotor spinning. However, dividing this small draft into break draft and main draft results in more disadvantages than advantages. For instance, if the goal is to achieve a 1.3-fold total draft using a break draft of 1.15, then only a draft of 1.13 remains for the main draft (1.15*1.13 = 1.3). This means that the leveling dynamic is limited to 13 percent. This is much too low to respond to short-wave fluctuations. For comparison: With the autoleveler draw frame, the main draft and thus the leveling range often exceeds 400 percent.

By eliminating the break draft in the IDF 2, the entire drafting takes place in one drafting zone. Thus the leveling range is fully utilized. Fluctuations are ideally compensated this way. If two parameters must be optimized simultaneously, it is much more difficult to find the technologically better setting. This is because break draft and main draft must be varied and constantly adapted to material changes. The IDF 2 is thus not only the better technological solution, but also simplifies handling. This is a particular advantage, since nowadays many spinning mills have to deal with the problem of having hardly any qualified personnel available to technologically evaluate settings of this kind.

When using a normal-width drafting system, larger masses are accelerated and decelerated again during leveling, which can lead to increased energy consumption. For this reason the width of the bottom and top rollers of the IDF 2 has been reduced to the width of a sliver. This also allowed the introduction of the clever solution of rotating top rollers, which has led to a doubling of the service life before grinding.

The IDF 2 also introduced the sliver loop storage. This driven deflection roller levels the sliver loop by means of an integrated light barrier, resulting in perfect synchronization between card and IDF. The leveled loop permits high change speeds. This ensures a higher efficiency at the card, especially when using small rotor cans.

The combination of Trützschler cards with IDF 2 gives customers an advantage, because they produce a thin, stable web which is perfectly suited to be drawn directly to the desired sliver count — at highest production rates and lowest drafts. If cards produce a heavier web, the use of low drafts is not possible at all, as, for example, from 12 ktex to 5 ktex a draft of 2.4 is applied.

In order to show the influence of the distribution of drafts on main draft and break draft as opposed to only one draft zone, a yarn of 100 percent raw cotton (Mato Grosso) with Ne27 was spun in the direct spinning process with a card production of 170 kilograms per hour. With IDF 1, break drafts of 1.0, 1.05 and 1.16 with different main drafts were combined. The IDF 2 was run with drafts of 1.2 to 1.95. The tests showed the trend across all parameters that IDF 2 with its 1-zone drafting system has clear advantages over IDF 1. 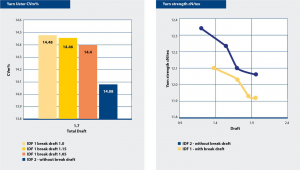 The first diagram shows the influence on yarn evenness for a total draft of 1.7. There is clear evidence that the break draft in the IDF has a negative influence on yarn parameters. It is noteworthy that for all quality parameters, the presence of the first drafting zone in the IDF 1 alone has a negative effect on the results, without any actual tension being applied. (IDF 1 break draft 1.0).

The second diagram illustrates that IDF 2 and IDF 1 both have the same trend, i.e. that the yarn strength decreases with increasing total draft. Compared to IDF 1, IDF 2 shows overall strength at a higher level. This confirms the statement that the use of only one drafting zone has a positive effect on the yarn properties.

Development Of The IDF 2

The IDF 2 has been established on the market for seven years. The advantages of the system are now recognized by the entire professional community, competitors and customers. Initially, the shortened process was only used with 100 percent cotton — preferably from the recycling sector — but today it is no longer limited to this. The system is successfully applied in the processing of 100 percent raw cotton and other materials. It thus offers an answer to the requirements of our customers with regard to increasing and necessary flexibility in the production process.

The handling of the IDF has also been improved. For example, there is now a retention lock that prevents the cover of the IDF from always having to be opened completely during the piecing process. Similarly, the use of maintenance-free deep groove ball bearings entirely eliminates the need for relubrication at the delivery rollers: The number of lubrication points is thus reduced to four. The self-adjusting lap monitoring of the top rollers, already known from the draw frames, has now also found its way to the IDF. There is no need to readjust after grinding intervals and changed settings.