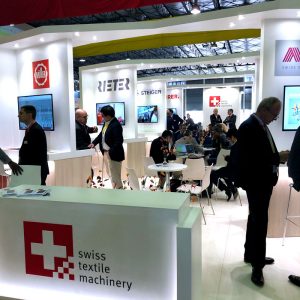 ZURICH — March 16, 2020 — Swiss textile machinery companies made a major impact at the inaugural ITME Africa trade show, with 12 member companies from Swissmem (the Swiss Textile Machinery Association) presenting their latest technologies. The event, staged in the Ethiopian capital Addis Ababa from February 14-16, featured more than 170 exhibitors from 15 countries. It was organized by India ITME Society, as an extension of its existing trade shows in India.

Post-show reports from the Swissmem companies indicated a high level of satisfaction with the organization — and the positive impression made by the attractive design of the Swiss Pavilion. The business prospects were also said to be upbeat, with Ethiopia and neighboring East African countries increasingly viewed as fertile ground for technological and commercial developments in textile production. The region is widely viewed as an emerging option for global apparel sourcing.

Machinery and know-how from Switzerland offers the innovative and quality-focused boost that these markets could utilize to raise their competitiveness and broaden their appeal to international customers, according to Cornelia Buchwalder, secretary general of the Swiss Textile Machinery Association: “Our member firms together have more than 4,000 years of cumulative experience, covering the entire textile value chain,” she said. “That means we have the power and the technological expertise to help textile manufacturers in these markets take the next step in their development.”

There were suggestions that attendance at the exhibition was affected somewhat by travel restrictions and uncertainty related to the corona virus outbreak, but reactions from the Swiss participants also included comments such as “promising”, “potential” and “exciting,”  while some mentioned new sales leads and even concrete proposals.

Feedback from the Embroidery Business Unit of Saurer Technologies was enthusiastic, according to general manager Efthimios Katsidis: “The Swissmem stand was clearly the most beautiful at the exhibition, and this was mentioned repeatedly by all visitors with admiration. Many thanks to Swissmem for the great organization. During the three days of the fair, we were able to conduct many exciting discussions with customers, which indicates that the East African market has much promising potential. We are already looking forward to our next participation.”

Rieter’s sales chief for this Asia-Africa region, Gerald Steiner, also praised the Swiss Pavilion design and open-booth layout, as well as the visitor response: “We had good discussions with existing and potential customers and could generate new leads, “ he said. “Besides Ethiopia, East African and South African countries were also represented by visitors, while students from various textile universities were present to be updated about the latest innovations in the industry. On the whole, ITME Africa 2020 was a very satisfying event.”

Steiger Participations, the Swiss manufacturer of flat knitting machines, attended ITME Africa to introduce its own products and represent its shareholder Ningbo Cixing Co. Ltd. China. Steiger sales and marketing executive Carlo Corradi said: “The market of Ethiopia, with a population of more than 100 million, is considered to have good potential for the mid to long term. Various foreign textile manufacturers have already installed production units in Ethiopia, with the attraction of low production costs.”

“Taking into account that it was the first international textile machinery exhibition in Ethiopia and in Africa, the quality of the various meetings with customers from Ethiopia and other East African countries was considered as very good and promising for the future. Some concrete projects are already under discussion.”

The yarn processing and winding technology specialist SSM (Schärer Schweiter Mettler) also reported a positive experience at the show. Area sales manager Robin Gutbrod said: “SSM was very glad to have exhibited at the ITME Africa 2020. The well-organized exhibition was an excellent opportunity to meet customers from Ethiopia and surrounding countries, enabling SSM to better understand the requirements of customers in the growing East African market.”