MILAN, Italy — July 29, 2015 —Orders of textile machinery for the second quarter of 2015 confirm the positive trend already under way during the first three months of the year. Raffaella Carabelli, President of ACIMIT: “Increased orders on the domestic market are an unexpected but welcome development: a good omen for ITMA 2015. Abroad, we’re very optimistic on Iran.”

For the second quarter of 2015, orders of Italian textile machinery, as compiled by ACIMIT, the Association of Italian Textile Machinery Manufacturers, recorded a 15% increase over the same period of last year. The value of the orders index for this period amounts to 99.4 points.

Orders have made a definitive move in foreign markets (+21% over the same quarter for 2014), marking a fourth consecutive period of growth. Italy remains under observation, but is showing sure signs of a recovery. Indeed, domestic orders have risen 7% compared to the second quarter of 2014.

“This growth for the Italian market is somewhat unexpected” states ACIMIT President Raffaella Carabelli, “It’s highly likely that the incentives implemented by the Government may have contributed to this light recovery in our sector. The rest was certainly achieved by the healthy situation of various sectors downstream from our own.” With ITMA 2015 so imminently close, the global trade fair scheduled in Milan on November 12 – 19, businesses are waiting on the innovations that will be presented in Milan. “The recovery of our domestic market is certainly a good omen for ITMA, where 450 Italian exhibitors will be present – 27% of the total number of companies.”

As for foreign markets, official data from ISTAT confirm a recovery for the first four months of the year in various textile machinery importing Countries. India, for one, has resumed its growth trend (+6% over the first quarter of 2014), and there’s been a surprising rise in exports to Bangladesh (+187%), with EU markets also appearing to show good form. “We’re waiting for a recovery from China, where investments in machinery are still low compared to a year ago,” observes Carabelli. “But ACIMIT has mainly been targeting the market in Iran.”

“For years,” ACIMIT sources explain, “Iran was a benchmark for Italy’s textile machinery industry. International sanctions have effectively halted the flow of machinery exports towards Iran, penalizing many Italian manufacturers. The recent agreement on the nuclear issue opens up a window for a recovery in investments in textile technology by Iran’s textile sector, after years in which the process of industry modernization has been slowed by a regime of sanctions.” The negative trend for Italian exports was stopped in 2014. Sales of Italian textile machinery grew 170% compared to 2013, amounting to 14 million euros. 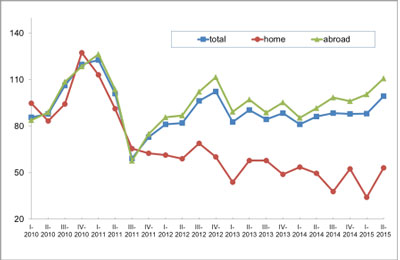