Paris-based Lectra recently
celebrated its 30th anniversary. The company was established in 1973 as Lectra Systèmes in
Bordeaux, France, by Jean and Bernard Etcheparre, developers of the LECteur-TRAceur 200 system for
automatic calculation and tracing of all sizes for an apparel style. 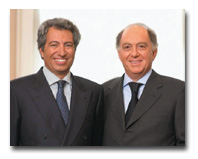 During the 1990s, the company debuted
the Vector computer-aided cutting system, which it now offers for specific market sectors. It also
expanded into aerospace, automotive, footwear, and furniture and furnishings markets, as well as
internationally.

The company shortened its name to Lectra in 2001. It has continued to grow, and today claims
the number-one position globally for CAD/CAM software and equipment for textile and composite
end-users.