Typically, if a flexible material is stretched in one direction, it thins out in the other; and if compressed in one direction, it thickens in the other. However, in the case of auxetic materials, the converse is true. For example, if a thin, inelastic fiber is wrapped around an elastic core and then pulled lengthwise, the elastic component bulges outwards. This simple, elegant auxetic effect can be the basis of some revolutionary solutions for all sorts of textile applications.

Zetix™ helical-auxetic fiber technology – developed in the United Kingdom by Dr. Patrick Hook, managing director, Auxetix Ltd., in collaboration with researchers at the University of Exeter and Dow Corning Ltd. – has won several awards, including the Techtextil 2007 Innovation Prize. Hook, an engineer who had been involved in the motor racing arena prior to pursuing a doctorate in engineering with a focus on auxetic materials, established Auxetix to commercialize
the patented technology. Auxetix now has granted an exclusive license to Houston-based Advanced Fabric Technologies LLC (AFT) to develop and market Zetix fabrics for use in blast-mitigation and ballistic-protection fabrics in North America, as well as first right of refusal to market and manufacture the fabrics elsewhere in the world. 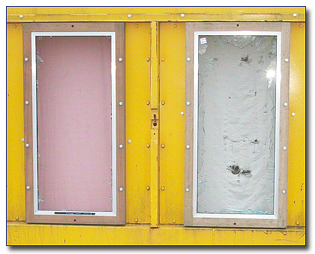 A test conducted by the UK Ministry of Defence compares the performance of a Zetix™ blast
curtain (left) with that of a conventional blast curtain.

“This is a completely new approach to material science, particularly for blast and ballistic mitigation, and we think it’s going to be a game-changing, breakthrough technology,” said Tony Lentini, AFT’s vice president of marketing.

Zetix comprises a series of auxetic yarns, each yarn wrapped using S or Z twist with a high-strength cord — or “power thread,” as Lentini described it — and woven by weft insertion across the warp. Off the loom, the weft becomes the tensile element in the fabric. “When force is
applied,” Hook explained, “the auxetic yarns deform, opening thousands of small pores in the fabric’s surface. In so doing, they absorb the peak pressures from the blast wave and yet allow the
rest to pass through. At the same time, they catch any airborne debris such as glass shards, shrapnel or secondary fragmentation.” In simulated car bomb testing and grenade testing, Zetix has shown “remarkable resilience,” sustaining negligible damage after eight nearby grenade blasts, he added.

“It is the only material on the market that automatically adjusts its strength and thickness in response to explosive forces,” said AFT CEO David O’Keefe. “Because it has memory, it returns to its neutral state when the stress is dissipated.”

The basic Zetix fabric is made with a Spectra®-wrapped polyester monofilament and ballistic nylon; but materials such as Kevlar®, Vectran™, Hytrel®, Nomex®, fiber optics or telemetric materials may be used for specialized applications.

“That gives you the capability to have many generations of Zetix,” O’Keefe said. “We can immediately increase the strength by probably 80 to 85 percent just by substituting Vectran for ballistic nylon.”

Bungee cords wrapped with inelastic cords and then stretched demonstrate the principles of
helical-auxetic technology.

Potential blast- and ballistic-protection applications include spall liners for armored vehicles, allowing a reduction in armor thickness and a consequent reduction in vehicle weight. Incorporating Zetix in body armor worn by soldiers in the field also could lighten the load they
must bear.

O’Keefe said Zetix will be cost-competitive weight-for-weight with other blast-mitigation fabrics, and its performance advantage will provide added value. “Because it’s not a single-event fabric, the cost of development or installation would be recouped pretty easily,” he said.

Although Zetix has successfully undergone official testing in the United Kingdom, the performance data from those tests is not easily accessible, so AFT is conducting testing in the United States so it can provide specific results to potential users. “We want to provide hard data to support Zetix’s claims, and we’re working with other companies and independent testing labs to generate it,” Lentini said.

AFT is working with US and Canadian manufacturers including Greensboro, N.C.-based BGF Industries Inc. and Quebec-based JB Martin Co. to produce Zetix fabric and is seeking additional
partners along the supply chain for various aspects of production.

“We’re looking for materials that would work well and be low-cost, and we’re looking for a variety of sources,” Lentini said. “For example, a critical component is the wrapping of the power thread because it’s key to the whole auxetic effect. We’re looking for people with capabilities to
do that efficiently and who can supply that thread to the weavers.”

While the immediate focus for Auxetix and AFT is to provide blast-mitigation and ballistic-protection solutions for military and first-responder applications, there are many other areas in which Zetix technology can play a role. Even those initial solutions have relevance for non-defense applications, such as mine safety, hurricane protection, satellite testing, jet engine shielding — the list goes on. Nomex or a Hytrel flame-retardant yarn could be incorporated to add protection from high-heat or a fireball. With the addition of fiber optics, a Zetix apparel fabric could change color to help camouflage the wearer; or the addition of telemetric materials could allow remote monitoring of a person’s heartbeat or other vital signs. In the medical field, potential applications include adjustable bandages, sutures and medication delivery. There is good potential for filtration, as the behavior of the yarns can allow a filter to self-adjust in response to applied force; and the self-adjusting capability in a seat belt could help minimize
injury from an accident.

“Down the road, your imagination is the only limit to what this might do,” Lentini said. “Way down the road, imagine a military battle uniform that is blast- and shrapnel-resistant, can change color because of fiber optics, has telemetry that will measure a soldier’s vital signs and
could send a signal to adjust a built-in tourniquet. This may be pie in the sky now, but the auxetic effect is so important here, you can let your imagination run wild.”