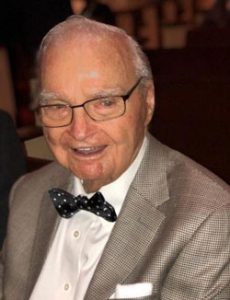 HUMBOLDT, Tenn. — June 8, 2020 — Jones Family of Companies is saddened to announce the passing of Ralph Jones, Jr. He passed away peacefully at his home in Humboldt, Tenn., on June 4, 2020, at age 95. Before his tenure as President, CEO, and Chairman of the Jones Family of Companies, Jones enlisted and served in the United States Army during WWII. He was honorably discharged in 1945 after receiving the Combat Infantry Badge, Bronze Star, Purple Heart, European Theatre Ribbon with four Battle Stars, and the Presidential Unit Citation. After returning home, he enrolled in the Textile Engineering program at North Carolina State University and obtained his engineering degree in 1949. Jones joined his father at Jones Family of Companies and became the third generation of his family in textiles.

Outside of his commitment to work, Jones was a devoted husband and father. In 1947, he married the love of his life, Bettie Jean “BJ” Graves. She preceded him in death in 2016 after 69 years of marriage. Together, they had four children, 11 grandchildren, and 13 great grandchildren.

Beyond his work and his family, the community was of great importance to Jones. His service included: the Humboldt City School Board where he was named “Tennessee Outstanding School Board Member” and served as both chair and member; President of the Humboldt Chamber of Commerce; President of the Humboldt Jaycee’s Club; coached Humboldt Little League (17 years); coached the Humboldt PeeWee Basketball League (12 years). For his work within youth sports and the Humboldt School System, the football field house at Humboldt High School was named in his honor and he was inducted into the Gibson County Sports Hall of Fame. The Exchange Club also recognized his community service by bestowing on him the “Book of Golden Deeds.”

He was forever thankful for the richness of life he experienced in his hometown. Jones’ actions spoke clearly of his faith in God, love of Country, love of family, and love for his community.

Carbios, On, Patagonia, PUMA And Salomon Team Up To Advance Circularity In The Textile...