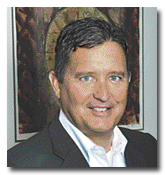 Minnesota Knitting Mills Inc., St. Paul, Minn., has named Wade Kytola vice president and a member of the Board of Directors.