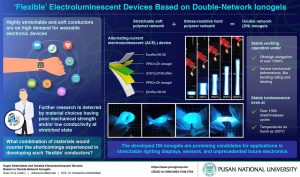 BUSAN, South Korea — August 30, 2021 — ‘Super-flexible’ material appears to be an absolute necessity for wearable electronics of the future. Of all the scientists working on developing this material, researchers from Pusan University have achieved success in developing one like never before, which is not only super stretchable, but also deformable, according to a study published in Advanced Materials.

The future will be colored by ‘bend-at-will’ light sources. A successful research study by a group of South Korean material scientists has proven that this future is not far away. As shown in a recent study published in Advanced Materials, this group from Pusan University has developed a super stretchable, deformable, and durable material through the application of mechanically reinforced ionogel conductors. The research paper, which was made available online on May 13, 2021, and was published in Volume 33, and Issue 25 of the journal on June 24, 2021, elaborates how this material can be applied in a ‘super-flexible’ alternating current electroluminescent device.

Speaking about the development of the novel material, Professor Jinhwan Yoon (ORCID id: 0000-0003-1638-2704), who is also one of the corresponding authors of the study, remarked: “We developed stretchable and durable conductive ionogels with a double-network (DN) structure, which is achieved by combining stretchable soft polymer network with stress-resistive hard polymer network.” Professor Yoon and his team highlights that the developed material shows high mechanical robustness and good electrical conductivity against extreme elongation for the developed ionogels.

Furthermore, the researchers went a step further, and successfully demonstrated the operation of ‘super-flexible’ electroluminescent devices fabricated with developed ionogel. Notably, the device functioned even with an extremely large mechanical elongation of up to 1200%, and various deformation such as bending, rolling, and twisting. In addition, the developed devices also display stable luminescence over 1,000 stretch/release cycles or at temperatures as harsh as 200°C, unlike any of its predecessors.

With such a breakthrough advancement in “super-flexible” electroluminescent material, Professor Yoon is hopeful about potential applications, stating “We believe that the future of current electronics would be deformable and stretchable beyond simply flexible and bendable for wearable application. With the soft electrode platform we developed, it is expected that more development on wearable electronics can be boosted, thereby people can wear lots of unprecedented devices enabling them to monitor their motion and health condition, display the information etc.” Indeed, the study has yielded a futuristic ‘super-material’!