Three-dimensional (3-D) woven composite products are finding increased use in new applications and as replacements for metal components in a variety of areas. Product designers and engineers are making marked improvements to real-world applications by taking advantage of the many desirable attributes that 3-D woven composites possess. These include significant weight savings, increased toughness, improved fatigue resistance and the ability to create more fully integrated assemblies. An advanced mortar baseplate being developed for the U.S. Army is one such application. 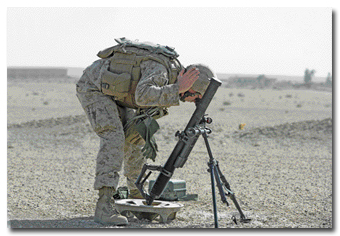 In a typical mortar weapon system, the cannon assembly is attached to the baseplate via a socket in the baseplate’s center, while the bipod acts as the cannon’s legs.
Photo courtesy of The Defense Imagery Server

Mortar System Described
A mortar is an indirect-fire weapon system that launches projectiles, or mortars, at low velocities, over relatively short ranges in typically high-arcing trajectories. Mortar systems employed by the military normally consist of three main segments: the cannon assembly; the bipod; and the baseplate. The baseplate provides a foundation to support the cannon assembly during firing. Current baseplate configurations, commonly made from aluminum, incorporate legs to better seat the baseplate to the ground. Its stability is critical to consistent and repeatable mortar targeting. The relatively large surface area of the plate itself helps to steady the mortar and prevents it from sinking into the ground during firing. The cannon from which the mortar shell is fired is attached to the baseplate via a socket positioned in the center. The socket seats the cannon and enables a full 360-degree traverse of the cannon barrel without having to move the baseplate. The bipod acts as the cannon’s legs, which ensure it’s pointed in the right direction during firing. When these components are assembled, the mortar system can weigh in excess of 100 pounds, and soldiers on foot generally carry these systems to their respective combat positions.

TEAM Inc., Woonsocket, R.I., a manufacturer of 3-D woven fabrics, is working with U.S. Army Research, Development and Engineering Command-Armament Research Development Engineering Center (RDECOM-ARDEC) Benét Labs, Watervleit, N.Y., to develop a new mortar baseplate concept derived from advanced 3-D woven composite technology. The Army’s interest in investigating 3-D woven composite systems for the baseplate grew from product successes in other areas where the inherent advantages of such composites had been demonstrated. Relevant advantages for this application include:

Considering that one chief attribute of the mortar system is mobility, the primary driver to investigating a composite approach was reducing weight of the baseplate and consequently the overall mortar system, which would ease the burden on soldiers who might be carrying these items along with their standard combat gear over long distances of varying terrain and under possibly adverse conditions.

Shortcomings Of 2-D Laminated Composites
Benét Labs has previously tested carbon fiber/epoxy composite mortar baseplate assemblies made using traditional 2-D laminated composite fabrication techniques. During a typical 2-D lamination process, individual layers of fabric are cut to size and laid-up in a mold, where they are combined with resin and molded into a composite shape. Testing of varied mortar system performance levels has shown that local stresses on the baseplate tend to be highly variable depending on the firing angle, ground composition and seating position of the baseplate in the ground. When mortar baseplates made from 2-D laminated composite were subjected to impact loads representative of live firing, multiple areas of delamination failures were observed. Of greater concern was that during the testing, one or more of the baseplate’s legs in the 2-D composite separated from the plate. The need for better integration of the legs to the plate coupled with the delamination failures prompted the investigation to replace the 2-D laminated composites with 3-D woven composites.

The 3-D weaving process is capable of producing woven preforms with different weave patterns, shapes, widths and thicknesses (See “An Introduction To 3-D Weaving,” Textile World, July/August 2012; and “3-D Weaving: Applications And A Range Of Possibilities,” TW, September/October 2012). It introduces a third yarn system through the thickness into the woven assembly, providing reinforcement in the Z through-thickness direction. Designers and engineers can manage the process to dictate the orientation and positioning of fiber paths in the warp; weft; and X, Y and Z through-thickness directions to be more in line with the stress requirements of the final part. As such, 3-D woven preforms can have cross sections of varying thickness; T and Pi cross sections for composite joint assemblies; hollow, non-linear or shell-shaped structures; and assorted combinations or variations thereof. This flexibility and improved 3-D weave design capabilities allow for the weaving of complex integrally woven near net-shape preforms, designed and woven to more closely replicate the final molded composite shape.

Finite element analysis (FEA) conducted at Benét Labs and by an independent contractor confirmed the need for and importance of the interface between the mortar baseplate’s plate and legs. These factors guided TEAM’s approach to developing the new baseplate concept. Using an innovative 3-D weave design, company engineers were able to take full advantage of 3-D weaving’s flexibility and create a baseplate concept in which the plate and leg geometries are integrally woven into a single, cohesive preform.

Advantages Of 3-D Woven Composites
Effective integration of a through-thickness yarn system in 3-D woven structures produces their intrinsic delamination resistance and a higher threshold for damage tolerance characteristics when compared to 2-D laminated composites. This contributes to a 3-D woven composite’s ability to handle severe impact loads like those imparted during repeated firing of mortars. The superior damage tolerance and through-thickness mechanical properties of 3-D woven composites are illustrated by their use for such applications as aircraft engine fan blades and multi-hit composite armor systems. TEAM incorporated similar design attributes into the 3-D woven mortar baseplate design.

The 3-D woven near net-shape carbon fabric preforms, incorporating fully integrated legs, were molded into the final baseplate shape by the University of Delaware’s Center for Composites Materials’ Applications Technology Transfer Lab (CCM-ATTL). CCM-ATTL designed and fabricated the tooling and developed the RTM process used to mold the baseplate. To minimize material handling, the preforms went through a two-stage trimming procedure using a novel ultrasonic cutting technology developed by AGFM Corp., Chesapeake, Va. CCM-ATTL then employed a nine-piece matched metal mold created to minimize preform placement and post-machining operations. In general, the 3-D preform’s conformability was excellent. After the application of resin and curing, the baseplates were finished and inspected. The finished baseplate weighed approximately 12 pounds, representing a 38- to 44-percent reduction in weight over the incumbent aluminum versions.

After demonstrating the projected weight savings with the 3-D composite mortar baseplate, the Army is actively proceeding with simulated fire testing and subsequent evaluations, which are scheduled to commence later this spring. Initial comments and results have been positive to date. TEAM will be making a presentation on the whole of this project along with additional results from ongoing testing during the upcoming SAMPE International Conference and Exhibition, to be held June 2-5 in Seattle.

Editor’s note: Jim Kaufmann is a senior engineer and Aaron Tomich is a program manager at TEAM Inc.