Nanofibers have long shown great promise for advancing textile and material performance in
applications ranging from air and liquid filtration to battery separators, to sound insulation and
fluid barriers in hygiene products. For example, in filtration, nanofibers have been shown
theoretically and empirically to demonstrate exceptional pressure drop ratings through the
engagement of the slip flow effect that cannot be achieved with bulk fiber. They are also best
suited for enabling the filtration mechanism of Brownian Diffusion, which can capture particulate
matter of .5 micron and smaller. Nanofibers also mimic the extracellular matrix that enables the
propagation of living cells for wound care and tissue engineering. These fibers, generally
described in commercial settings as having diameters of less than 1 micron, have been the subject
of intensive study for quite some time. Indeed, a literature review reveals an extensive field of
research and the reporting of performance improvements. One is hard-pressed to find a university
that does not have a makeshift electrospinning needle that is being used to demonstrate the
advances in material performance that occur at the nanoscale. Academia has applied great diligence
in characterizing and reporting these findings. Furthermore, a patent search quickly reveals that
many of the largest nonwovens, filtration and textile companies in the world have not only
performed extensive R&D in this area, but have also made significant investments in protecting
their position. 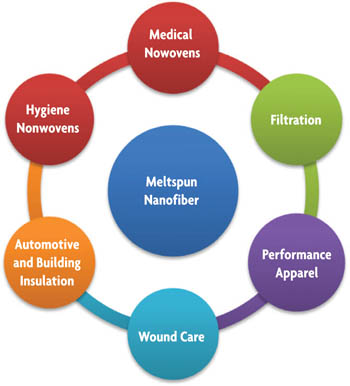 However, it is clear that the commercialization of the total potential of nanofiber
technology has yet to be realized. In 2010, BCC Research LLC, Wellesley, Mass., estimated that the
entire market for nanofiber products would reach approximately $183 million in 2012. In comparison,
microfiber production today is several billions of dollars annually and growing rapidly, according
to International Nonwovens Consulting, Raleigh, N.C. However, Donaldson Filtration Co. Inc.,
Bloomington, Minn., began pioneering nanofiber filters in the mid- to late 1980s. This was not long
after meltblown microfibers began to make their way to the end market and Reicofil
spunbond-meltblown-spunbond (SMS) lines began to proliferate. In evaluating the driver behind this
divergence, one must look at the differences between melt-based processes and solvent-intensive
processes such as electrospinning. Indeed, the primary challenge in scaling electrospinning has
been the high solvent-to-polymer concentrations needed to produce the nanofiber. More solvents lead
to lower yields, dramatically increased operating expense and an environmental burden that is
counter to the vast sustainability efforts under way in most nonwovens and textile companies.
Indeed, research is underway to develop melt-based electrospinning. At a recent conference in
Japan, several leading electrospinning companies reported on the work they have done in this area,
but the data clearly demonstrated that significant challenges exist in converting electrospinning
to a melt-based process.

In an effort to finally begin to transfer the full potential of nanofiber technology to end
products, leading materials companies have addressed the challenges of productivity, profitability
and environmental responsibility by acquiring melt-based processes as the platforms they will
leverage into the future. This effort has initiated a new era beyond electrospinning that is
focused on melt nanofiber production technology. This article presents two process platforms that
exist today, the materials that are available in fiber form, the near-term markets for end
applications and the endless possibilities that are created when there is an unlimited availability
of nanofibers.


Meltblown is a one-step process in which high-velocity heated air blows a molten
thermoplastic resin from an extruder die tip onto a conveyor or take-up screen to create fibers.
Originally developed in its commercial form at Exxon in the late 1970s, meltblown has proven very
useful for making fibers with diameters in the range of tens of microns and higher, but the focus
of most of the development of this technology has been toward higher line speeds and integration
into spunbond lines. Recently, the effort has shifted away from higher-volume production and toward
finer fiber for advanced air filtration performance. Research conducted in Germany and the United
States has been focused almost solely on polypropylene (PP) and has shown gains in generating
fibers in the submicron range. The challenges faced in driving fiber diameter lower include the
importance of increasing the air-to-polymer mass flux ratio. This higher ratio leads to a need for
very high air velocities and limited polymer feed rates that increase operating cost and limit
productivity. Another challenge is the broad distribution of fiber diameters that can significantly
impact air filtration performance.

Recently, work has expanded beyond PP with gains being made by a research group at The
University of Tennessee in processing polylactic acid (PLA) nanofibers. PLA is coveted as an
eco-friendly thermoplastic with beneficial material performance. As work in meltblown continues to
expand into new materials, applications will increase as well.

Forcespinning® technology uses centrifugal force to process materials into nanofiber. A
spinneret cup is rotated at high speeds to initiate hydrostatic and shear forces that push a liquid
material, either melt or solution, though orifices lining the outer wall of a spinneret. As the
material enters the orifice chamber, molecules disentangle and then align directionally to form
nanofibers. This unique technology has only recently been developed to commercial-level production
by FibeRio Technology Corp., McAllen, Texas, and it has already gained significant momentum with
reporting of PP nanofibers with average diameters of less than 500 nanometers (nm). Furthermore, a
100-fold increase in productivity rate has enabled the technology to be viewed for more than air
filtration applications. Dramatic productivity gains have been demonstrated with both the
melt-based process and solution spinning via higher polymer concentration levels than those for
electrospinning.

Other materials that have been melt-spun include PLA, polybutylene terephthalate (PBT),
polyethylene terephthalate (PET), polyamides (PA), polyvinylidine fluoride, low-molecular-weight
polyethylene and thermoplastic polyurethane. The applications thereof are incredibly broad, ranging
from performance apparel to fuel filtration and more. However, the full potential of Forcespinning
technology will emerge as FibeRio sets its sites on melt processing engineered plastics into
nanofiber.

In the past year, FibeRio reported significant water-barrier performance improvements with
almost 60 millibar of hydrostatic head — a value compliant with Level 3 of the Association for the
Advancement of Medical Instrumentation (AAMI) PB70 standard — with only 6 grams per square meter
(gm2) of material compared to the traditional 15 gm2 of material from meltblown microfibers, making
the fabric lightweight and breathable through the use of nanofiber media.

Filtration: Nanofibers have been used for quite some time in air filtration
applications. However, the use of melt-based processes will expand their use in that market.
Melt-spun PP nanofiber from both meltblown and Forcespinning technology have demonstrated high
efficiency ratings with low pressure drop. The efficiency ratings are driven by the utilization of
Brownian Diffusion, while the pressure drop performance can be attributed to slip flow at the
surface of the fiber. These benefits create a significant opportunity for many filtration companies
because regulatory bodies have recently moved to eliminate the historical practice of
electrostatically charging the media to achieve high efficiency ratings as demonstrated by the new
European standard EN779:2012. 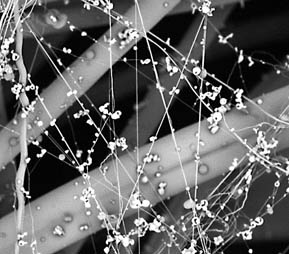 The use of melt-based production processes will expand the use of nanofibers for air
filtration applications.

However, as fiber diameters continue to decrease, new applications such as water filtration
become available. Significant opportunities are created using melt-spun PP and PET nanofibers to
achieve pore sizes comparable to those of membranes while providing the lower pressure drop of a
fibrous media. Additionally, PBT nanofibers can be used in fuel filtration and blood separation
applications.

Performance Apparel: Recently, nanofibers have found their way into end products
such as socks, jackets and even golf gloves. Materials have varied from PA 6 to PET. It is believed
that these processes were solvent-based, and it would stand to reason that the emergence of
melt-spun PET nanofibers, with higher annual capacities and lower operating expenses, could
substantially increase the use of nanofibers in these applications.

Wound Care: Management of moisture is driven by control over porosity, which is
why nanofibers have emerged as a critical tool in the wound-care industry. Furthermore, materials
must at the very least be biocompatible and preferably, in some cases, bioresorbable. In these
instances, toxic residue from solvents are a nonstarter and limit commercial opportunities.
Melt-spun PLA nanofibers and, in the future, melt-spun polycaprolactone fibers overcome this
challenge while simultaneously increasing productivity.

Acoustic Insulation: Environmental awareness and rising costs of fuel have driven
the term “lightweighting” to the forefront of the automotive and aerospace transportation lexicon.
In this regard, nanofibers enable automotive suppliers to substantially reduce material weights
while improving acoustic insulation performance. The challenge until now has been the cost
sensitivity and high volumes of such an industry. However, melt-spun nanofiber overcomes that
challenge, and PP and PET are resins that are already familiar to the industry.


As the range of materials broadens, another area being evaluated is the use of nanofibers in
dispersions and as reinforcements in composites. Nanoscale fibers are capable of even distribution
in a polymer matrix and hold great promise for improving tear strength, regulating viscosity and
improving other properties. Staple nanofibers are just beginning to be considered by materials
engineers and could have vast applications far beyond composite reinforcement. Cost-effective
volume manufacturing will enable these applications to become commercially viable.

Other markets that will come online as melt nanofiber processing achieves productivity and
line speed scale-up will be applications in hygiene nonwovens. As private label suppliers continue
to take market share, branded product suppliers are searching for new paths to differentiation.
This development has led to a search for technologies that provide thinner materials and enhance
fluid management capability.

Efforts in meltblown and Forcespinning technology are removing productivity, operating
expense and environmental barriers. As final hurdles to high-volume nanofiber production are
overcome, the conversation will shift away from process challenges and toward new end-product
development and intellectual property required to compete. The future of nanofibers is primed for
any applications that are looking for ways to reduce weight while improving material performance.
Melt processing also enables the use of new, greener materials for existing applications.
Furthermore, novel capabilities are enabled through the use of new materials such as aromatics,
sulfones, fluoropolymers and urethanes. Already, these materials have demonstrated great promise at
the research level, and new developments will rapidly scale them to continuous industrial
production.