S
taying on top of the manufacturing game often requires being the first to introduce a new
idea or product, making forays into new markets, and/or expanding in order to serve customers in
new locations. Following such a model, Dothan, Ala.-based Twitchell Corp. started out offering an
innovative product, expanded its product line to serve new markets and also expanded overseas to
serve customers that moved operations offshore. As it has grown, it has succeeded by identifying
high-growth market niches; developing innovative solutions in terms of performance, design and
environmental responsibility; and having a high degree of flexibility to provide well-designed,
durable products for a multitude of applications.

Today — with manufacturing bases in the United States and Asia and a global workforce of more
than 400 employees, and exporting 30 percent of its product to 35 countries worldwide — it boasts
$55 million in annual revenues. Its customers include global manufacturers of roller shades, pool
and patio furniture, awnings and screens, contract interior products, geotextiles, safety products,
automotive interiors and disposable operating room supplies; as well as the US military.

“Twitchell has a decades-long history of being a successful innovator in the field of outdoor
fabrics, textiles and yarns; and we’ve taken that and developed now into a real kind of product
development house,” said Jon Nash, CEO. “That’s where a lot of our future lies.”

Founded in 1922 by Earl Wagner Twitchell in Unionville, Conn., the company originally
manufactured woven paper products — the first in a string of industry firsts. The original product
line, Kanekraft™, today plays only a small part in its repertory. 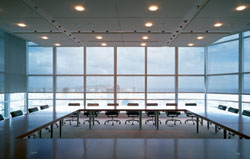 Twitchell Corp. moved to Dothan in 1954 and eventually made a transition to manufacturing its
current dominant product lines, beginning in 1968 with Textilene™ polyvinyl chloride (PVC)-coated
yarn products — another first for the industry.

“Twitchell has a history of reinventing itself as new markets develop,” said Jeff Register,
vice president, sales and marketing. “We began producing PVC-coated products during the 1960s and
became a major player in the outdoor furniture market, producing yarn and fabric for sling seating
and pool and patio furniture. In general, this was our major focus in the ‘90s and the early ‘00s.

“Textilene is our umbrella trade name for PVC-coated yarns,” Register said. “The yarns are
predominantly polyester, but the company is experimenting also with exotic core yarns such as
Vectran®, Spectra® and Kevlar®.”

As Twitchell’s customer base of pool and patio furniture manufacturers began to move to Asia to
take advantage of cost benefits, the company also moved to Asia to serve these customers. In 2001,
it set up a wholly owned subsidiary in Kaiping, China, to manufacture extruded wicker yarn and flat
strap that is handwoven onto chair frames.

As part of what Nash described as a three-pronged strategy, Twitchell also has set up joint
ventures and contracts with several leading manufacturers in Taiwan and China to produce fabrics
that are sold predominantly to outdoor furniture accounts. These relationships are beginning to
supplement the company’s specialty fabric sales. Twitchell continues to do all design work for
these fabrics in Dothan.

Today, 25 to 30 percent of Twitchell’s gross sales revenues come from products it makes in
Asia, Register said. “But, our move to Asia created capacity opportunities in Dothan, and we began
to reinvent ourselves again. Whereas in the ‘90s outdoor furniture was our major market, now it’s
contract interiors and specialty markets,” he explained, adding that these two markets now account
for more than 65 percent of sales.

In order to meet new product demands in these markets, the company has invested in new
equipment including wide-width weaving, beaming and extrusion machinery. It purchased 11 looms in
2005, and this year will install five more.

Nash noted the importance of innovation and product development to the continuation of
Twitchell’s domestic production.

“We’ve got to develop new, cutting-edge technologies that are appropriate for manufacture in
the United States. We watch the product life cycle very carefully as it goes from innovation and
our invention, to growth, to stability and ultimately to decline,” he said. “Some of the product
life cycles may be a couple of years long, and some may be several decades long, but we watch each
product as it goes through that life cycle and try to produce it in the appropriate place depending
on where it is in that life cycle.”

With the company’s growth in the contract market also came the development of Earthtex™ fully
recyclable, volatile-organic-compound-free TPO yarn and fabric, which has earned Charlottesville,
Va.-based McDonough Braungart Design Chemistry LLC’s Cradle to Cradle™ Silver-level certification
for eco-effective design and manufacture. The yarn is coated with the same olefin material as the
core, thereby allowing closed-loop recycling of the end-product at the end of its useful life into
new, virgin-quality product.

“Earthtex is a premium product and is priced competitively, but slightly higher than PVC
products. It is a very focused product for very specific applications. Companies like BP Oil and
Google have been among the first to grab it up,” Register said. Both companies installed EcoVeil
solar shade cloth at their corporate headquarters.

Register expects Earthtex will play an ever-larger role in Twitchell’s product strategy as
the company increases its involvement in the contract interiors market, where designers and
architects increasingly are specifying environmentally sustainable products. He also sees growth
opportunities in residential and consumer product segments.

“Our strategy is to partner with key players in key markets where Earthtex has significant
advantages,” Register said. In addition to the current solar shade and wall covering applications,
Twitchell is targeting floor covering, seating, panel fabric and automotive interior applications.

In the specialty arena, Twitchell manufactures upscale pool and patio products such as durable
wicker strap and yarns that look like natural fiber or leather. Other specialty areas include
outdoor screens, erosion-control products and super-strength hurricane screens.

“The rash of hurricanes, the change in intensity and the number of hurricane events has
really opened up a new marketplace, particularly on the Gulf Coast. We are developing several
products specifically for that new opportunity,” Register said. “The first is SuperScreen™, a
PVC-coated polyester screen that is approximately three times stronger than traditional fiberglass
screen. It has much better UV [ultraviolet] resistance and does not degrade in terms of strength
over time like fiberglass does. In some instances, trees have actually blown over on top of lanai
[pool enclosures], and the SuperScreen and lanai supported the tree. From both a strength and a
durability standpoint, it is vastly superior to the market norm. We provide a 10-year limited
warranty, while most fiberglass manufacturers provide at most one to two years if they provide
anything at all.” 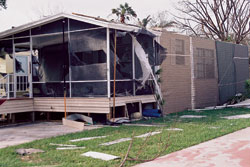 Twitchell products also are being sourced for beach restoration and levy reinforcement
projects along the Eastern Seaboard and the Gulf Coast. One product resembling a giant air mattress
filled with water and sand underlies the beach surface and prevents further erosion. Another
product, made with a bicolored Textilene mesh that blends with the sand color, forms a groin that
runs perpendicular to the shoreline into the water, preventing sand erosion parallel to the
shoreline.

Twitchell is collaborating with engineering firms to develop hurricane screens that have been
tested to withstand the impact of Category 5 winds and have passed Dade County, Fla., certification
for wind and projectile protection. It sees these screens as a viable soft alternative to aluminum
shutters.

Australia is a major market for Textilene for what Twitchell calls Awning with a View,
offered as Shadeview by Australia-based Imex Creative Products and as Vistaweave by Radins Agt Pty
Ltd., also based in Australia.

ldquo;Awnings there are different than what we think of here in the United States,” Register
explained, noting Australia’s drier climate, high UV intensity and skin cancer rates, and low angle
of the sun. “Awnings there are much lower to the ground and actually will cover up a large portion
of the window. A solid product would create a cave-like effect inside.

“Our Textilene product allows light to come through, and you can see out through it,” he
continued. “As long as it’s installed at an angle, 98 percent of the rain sheds off. But it also
allows a person inside to see out and allows some degree of light to come into the building,
creating a much more airy, open feel, while at the same time providing good shade. Most of these
products provide 90- to 98-percent UV protection.”

Register said Twitchell has modified the Awning with a View concept for a US Air Force
application.

“We worked with another company to create a solid PVC laminate on top of our awning material.
That laminate is extremely tough and durable and is used by the Air Force for fighter-jet
canopies,” he said. “Bases in the Florida Panhandle, New Orleans and Phoenix all use our product
exclusively. In a high wind, if a metal roof tears off, that could become a very hazardous
projectile. When a fabric tears off, its just a fabric and it rarely tears off. During Katrina last
year, the New Orleans base sustained 145-mile-per-hour winds. Less than 20 percent of the canopies
were damaged, and that damage was primarily due to flying debris.” 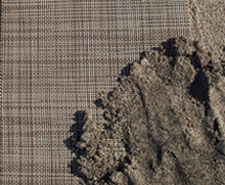 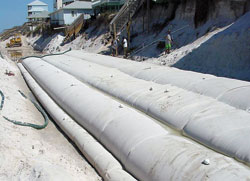 Advanced Coastal Technologies LLC, Dothan, Ala., uses Textilene fabric in its ProTecTube
beach restoration products. The outer-layer fabric is offered in colors to match the beach sand
within the project area.

“Our niche orientation is not a feature of Coated Products alone, however,” Register added. “
We have our own olefin extrusion line, and we can produce a 50-pound or a 5,000-pound order of
olefin, which predominantly is consumed in-house. Most of our olefin products are sold into outdoor
furniture, and we have recently started working with consumer products including cut yardages for a
multitude of end-uses.”

Nash spoke about the challenges
facing Twitchell, especially in the retail marketplace.

“One of the biggest challenges we face is the fact that the domestic retail market is driven
by such a ruthless sourcing model — which is not necessarily a bad thing, but it very definitely
drives you to different sorts of formulations in order to achieve the cost requirement for the
customer. So you’ve got to be very careful about exactly what you’re selling at any given time.”

While acknowledging the need to “stay on top of your game” when dealing with mass retailers,
Nash said, “We also work on how we can give a competitive advantage to the rest of the retail
marketplace — the market that is at the other end of the spectrum.” Speaking specifically about
outdoor furniture, Twitchell’s main retail market, he noted the “incredibly diverse market” in
which the mass retailer may sell a very inexpensive chair, while a smaller, specialty shop may
offer a much higher-priced chair.

“And the nice thing about that market is that it is so diverse and expanding,” Nash
concluded.