O
ur society is becoming evermore dependent on electricity and electronic products.
Nonwoven materials are key components in conventional electrical products such as wire and cable,
motors, transformers and batteries. The use of portable battery-powered products encompasses common
items such as watches and flashlights, electronic computers, and communication and entertainment
devices. Several entirely new classes of batteries have been developed over the last 20 years. An
important functional item in batteries is the separator, which in many battery designs is made of a
nonwoven fabric. As the market for such consumer products as hybrid cars grows, the use of
batteries as a key component will grow in importance. 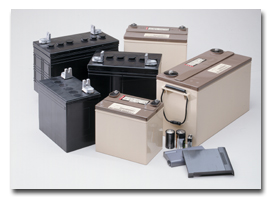 Batteries, such as those above produced by Hollingsworth & Vose, often contain battery
separators made of nonwoven material.

A battery, which actually is an electric cell, is a device that produces electricity from a
chemical reaction. A cell consists of a negative electrode; an electrolyte, which conducts ions; a
separator, also an ion conductor; and a positive electrode. The first workable device for
generating a consistent flow of electricity was invented around 1799 by the Italian inventor
Alessandro Volta. Volta’s discovery of a means of converting chemical energy into electrical energy
formed the basis for nearly all modern batteries. His first battery consisted of a series of
alternating copper and zinc rings in an acid solution, which functioned as the electrolyte. Volta’s
invention became known as a voltaic cell.

Electrolytes used in most common batteries may be aqueous (polar) or organic (non-polar)
solutions. Generally, batteries often are assembled without the electrolyte to facilitate shipping
and handling, and later are activated by adding the electrolyte. Polyolefins are very desirable as
a battery separator material because of their high chemical resistance to most types of battery
electrolytes. The separator must be easily wettable by the electrolyte; however,  battery
separators made of polyolefins such as polyethylene and polypropylene are hydrophobic and not
readily wettable. In order to be effective as battery separators, these materials must be made
wettable.

The zinc-carbon battery, also  called a dry cell, is the technological foundation of
today’s growing battery business. In this battery, paper separators containing an electrolyte
solution serve as an electrolyte reserve, and also as a membrane between the electrodes.
Zinc-carbon cells are sold in two general configurations – cylindrical cells and flat cells.

Nickel-metal hydride batteries consist of a positive plate containing nickel hydroxide as
the principal active material, a negative plate composed of hydrogen-absorbing alloys, a fine fiber
separator, an alkaline electrolyte, a metal case and a sealing plate with a self-sealing vent.
Their basic structure is similar to NiCad batteries. Fine-fiber polyolefin fabrics are used as
separators for this class of batteries.

Since automotive and other vehicle batteries represent the largest- volume use for battery
separators, a large part of research and development activity has been directed toward these
products. One of the largest producers of battery separators is Daramic Inc., Charlotte. Daramic
traces its origins back to the Dewey & Almy Division of W.R. Grace & Co., which produced
battery separators based on porous rubber as early as 1929. In the late 1940s, Dewey & Almy
started to use fine-fiber nonwovens of fiberglass as separators.

The glass fibers used to produce wetlaid fabrics for use as battery separators include
products such as Denver-based Johns Manville’s MicroStrand glass microfibers. These fibers are
available with diameters ranging from 0.20 microns to 5.50 microns.

One of the largest merchant suppliers of nonwovens for battery separators is Hollingsworth
& Vose Co., East Walpole, Mass. It devotes a considerable amount of its research and
development activity to battery separators. In addition to its wetlaid nonwovens capabilities, the
company is producing meltblown nonwovens from polyolefins.

Meltblown polypropylene has become an important product in the manufacture of battery
separators. The first work on meltblown battery separators was done at Esso Research &
Engineering and EnJay Chemical Co. (now part of Dallas-based ExxonMobil) in the late 1960s and
1970s. One of the earlier patents on this work was assigned to Exxon Research & Engineering.
This patent discloses the formation of meltblown polyolefin into a mat that then is compacted to
form a battery separator with required porosity and other necessary properties. Another related
patent, “Wettable Non-Woven Structures and Components Thereof,” issued in 1977, also was assigned
to Exxon Research & Engineering. A large number of companies now are making battery separators
using meltblown technology.

Although polypropylene has been the preferred material for meltblown battery separators,
products also have been made using polyamides. Recent patents have been assigned to Cargill,
Minneapolis, disclosing separators made from polylactides. Midland, Mich.-based Dow Chemical Co.
has disclosed the use of syndiotactic polystyrene for battery separators. 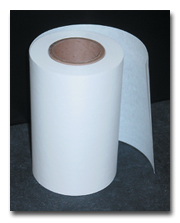 One of the areas that will drive research and development efforts for battery separators
will be the activity associated with electric and hybrid/ electric vehicles. A present limitation
with the all-electric vehicle is that the driving range is only between 50 and 130 miles.
Recharging times are in the range of six to eight hours. The success of the hybrid Toyota Prius is
accelerating activity with modifications and improvements of batteries such as NiCad, lithium-ion
and nickel-metal hydride.

A fuel cell is an electrochemical device similar to a battery, but differing in that it is
designed for continuous replenishment of the reactants consumed in the unit. It produces
electricity from an external fuel supply, and so does not have the limited capacity of a
conventional battery.

Typical reactants used in a fuel cell are hydrogen on the anode side and oxygen on the
cathode side. In fuel cells, reactants typically flow in and reaction products flow out. In the
case of the hydrogen fuel cell, water flows out.

Nonwovens have potential use in the membrane systems of fuel cells and in filtration systems
for the products flowing into the system. Southeast Nonwovens Inc., Clover, S.C., announced it is
engaging in contract research work for the production of nonwovens for fuel cell components. The
company’s pilot-scale nonwoven equipment can produce drylaid, wetlaid and hydroentangled nonwovens.

One of the earliest uses of spunbonded polyester fabrics was for electrical wire and cable
insulation. As the growth of electronic and optical cables has escalated, tapes made of nonwovens,
which include additives such as carbon fiber and superabsorbent powders, now are widely used. The
incorporation of the superabsorbent materials in the cable protects against cable failure due to
water intrusion. One of the major suppliers of these tapes is Polymer Group Inc. (PGI), North
Charleston, S.C. PGI has a wholly-owned subsidiary in Bailleul, France, which sells tapes under the
Geca-Tape brand name. PGI also sells fibers made of swellable acrylic fibers for cable filling.

For many years, the conventional dielectric material for electrical uses such as oil-filled
cables, cable bushings and cable splices has been an oil-impregnated kraft paper. The paper is made
using deionized water to prevent the absorption of conducting materials. At voltages higher than
345,000 volts, a significant amount of the input power is lost due to heating the oil-paper
insulation system. The dielectric properties of polypropylene in combination with the oil provide a
lower power loss than the kraft paper/oil combination. In the late 1960s, Esso Research (now
ExxonMobil Research) conducted research using compacted meltblown polypropylene webs to replace the
kraft paper in kraft/oil systems. Although this application looked promising, several of the major
utility companies showed little interest in doing further work, because fuel prices were relatively
low during this period. 3M, St. Paul, Minn., also pursued similar insulation work and was issued
patents on the concept. Nippon Kodoshi Corp., Japan, pursued similar work. Since most of the
original patents have expired, this concept might be worthy of further pursuit.