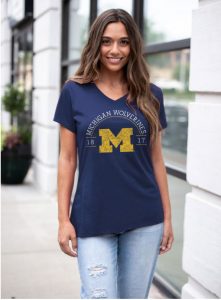 WINSTON-SALEM, N.C. — August 25, 2022 — HanesBrands (HBI) and the University of Michigan today announced a multiyear extension of their current apparel partnership that gives HBI exclusive rights to design, manufacture and distribute Wolverine fanwear in the mass retail channel. HBI is the world’s largest supplier of collegiate fan apparel and has been an exclusive apparel partner with Michigan for more than a decade.

“Michigan is a powerhouse in every way, on the field and in the classroom, and has one of the largest alumni networks in the world,” said John Fryer, HanesBrands president of Licensed Sports Apparel. “As consumer-driven leaders in the apparel industry, our Champion® and Hanes® brands drive purchase across the retail spectrum. We’re proud to leverage these brands and others in our long-term commitment to provide quality, responsibly made fanwear to Wolverine students, alums and fans.”

HBI also continues as a preferred supplier with the M Den, the official retailer of the University of Michigan Athletic Department and one of colleges’ most renowned campus stores — and where Champion apparel has been a go-to for the Wolverine faithful for decades. In addition, the Champion brand will continue to engage with student athletes through name, image and likeness (NIL) agreements as it did with University of Michigan track and field standout Ziyah Holman earlier this year. Holman was part of a distinguished group of female athletic standouts featured in the brand’s “Get It Girl” campaign.

The partnership extension with HanesBrands follows a detailed analysis of the University of Michigan trademark licensing program and a competitive proposal process completed in conjunction with the university’s exclusive licensing agent, CLC. In addition to these exclusive programs, Michigan will continue its partnership with Nike as the provider of performance products and specific fan merchandise.

“As we head toward opening kickoff of football season, there’s a lot of momentum for Wolverine apparel following the team’s outstanding performance last year — winning the Big Ten title and finishing the year ranked No. 3,” Fryer said. “We expect to see a lot of Champion apparel in maize and blue.”