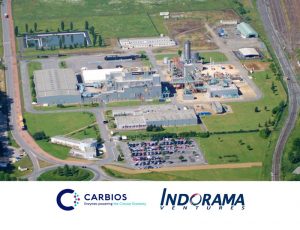 CLERMONT-FERRAND, France — February 23, 2022 — Carbios and Indorama Ventures jointly announced a collaboration to build a manufacturing plant operating Carbios’ PET bio-recycling technology at Indorama Ventures’ PET production site in France (Longlaville, Meurthe-et-Moselle). The plan is for reference plant to be operational in 20251 with a processing capacity of 50,000 tons of PET2 waste per year and creating 150 direct and indirect jobs. Indorama ventures plans to co-invest in this project3 and will consider expanding Carbios’ unique biological recycling process at other PET sites4 for future developments. This strategic project is strongly supported by the French Government and the Grand-Est Region5 with significant non-dilutive financing.

Bruno Le Maire, French Minister of the Economy, Finance and the Recovery, said: “We are very pleased that Carbios and Indorama Ventures have chosen France to build their first 100-percent bio-recycled PET manufacturing plant. From cutting-edge science, Carbios has developed a disruptive technology and process that enables efficient transformation of plastic waste into novel valuable products. This breakthrough project showcases the government’s ambition within France 2030: getting ready for the challenges of the next decade. Combining biotechnology and a renewed industrial ambition will be key to achieve a more circular economy.”

Agnès Pannier-Runacher, Minister Delegate for Industry, noted: “The announcement by Carbios of a flagship project of enzymatic plastic recycling demonstrates our ability to foster the emergence of innovative industry leaders with cutting edge technologies for the energy transition. It is a success for industrial startups in France as well as a key milestone in the France 2030 strategy, making our industry ready to meet the needs of the Transition.”

Jean Rottner, President of Grand-Est Region, said: “Contributing to a cleaner planet while creating new jobs and economic value is our core mission. Hence, we are very pleased to welcome Carbios in Grand-Est Region and very proud to greet Longlaville site selection for their world-first 100-percent bio-recycled PET plant, in partnership with Indorama Ventures, already present and very active in our Region. Carbios reference plant is fully integrated within Grand-Est Region ambition to become a leading territory for PET circular economy. This project represents a first significant milestone in building our complete ecosystem.”

After having successfully started-up its demonstration plant in Clermont-Ferrand, Carbios is now moving one step further towards the industrialization and commercialization by partnering with Indorama Ventures. The goal is to build and operate in France the world’s first industrial-scale enzymatic PET bio-recycling plant, with a processing capacity estimated at ca. 50,000 tons of post-consumer PET waste per year, equivalent to 2 billion PET bottles or 2.5 billion PET trays.

“With this first medium-sized plant, we want to become the world reference for the Circular Economy of plastics and textiles. By engaging in such a partnership with Indorama Ventures, we confirm our commitment to pursue our initial industrial development in France. This plant will pave the way towards international commercial and industrial deployment. We are grateful to our shareholders, partners, the French Government, and Grand-Est Region for sharing Carbios’ ambitions and vision towards a profitable Circular Economy,” commented Emmanuel Ladent, CEO of Carbios.

“We are pleased to implement Carbios’ innovative and transformative technology at our Longlaville site. Bio-recycled PET addresses customers’ growing demand to contribute to a cleaner planet through high-quality plastics while decreasing the use of hydrocarbons.” adds D K Agarwal, CEO of Indorama Ventures.

The capital investment required for the project is expected to be around 150 million euros for Carbios core technology, including in particular an additional purification step, which has been integrated into the process. In addition, an estimated 50 million euro investment will be allocated for the infrastructure preparation of the site. The project is expected to create approximatively 150 direct and indirect full-time jobs. In the coming months, Carbios expects to finalize a strong non-dilutive financial support from French Government and from the Grand-Est Region5, based on the offer received last week by Carbios, from the Minister of Industry, Agnès Pannier-Runacher and the President of Grand-Est Region, Jean Rottner.

This financial support will be conditional on the notification to the European Commission and on contractualization by French authorities. Carbios announced in its half-year results on September 30, 2021, a cash position of 112 million euros. Since then, Carbios has also secured a 30 million euro loan from EIB6

This collaboration reflects both parties’ ambition to address the growing concern of plastics pollution through the development of Carbios’ enzymatic bio-recycling process. This disruptive technology could accelerate the transition to a plastics Circular Economy.

With its world-first enzyme-based biological process, Carbios’ technology, named C-ZYME™, converts PET (the dominant polymer in bottles, trays and textiles made of polyester) into its core monomers, which can then be used to manufacture 100-percent recycled and infinitely recyclable PET. This first-of-a-kind manufacturing plant combines Carbios’ science and technology with Indorama Ventures’ world-class manufacturing capabilities. This collaboration will meet the growing needs of both demanding consumers and large consumer goods companies including Carbios’ partners and shareholders (L’Oréal, Michelin, L’Occitane, Nestlé Waters, PepsiCo, Suntory Beverage & Food Europe) for more sustainable packaging.

1Estimated date, depending on the grant of the authorizations to build and operate and on the terms and conditions remaining to be defined for this collaboration between both parties.

2 Polyethylene terephthalate (PET) is the most abundantly used synthetic polyester in circulation today, with an estimated global production of 82 million metric tons per year (IHS Markit in 2020).

3 Subject to the completion of technical and economical due diligence in the coming few months.

5 Conditioned to aid notification to the European Commission and in-additional assessments by French authorities.