BIRKENHEAD, United Kingdom — August 20, 2015 — Cotton Outlook’s latest forecast of world production and consumption in the 2015-16 season suggests a reduction of 584,000 metric tons in world stocks, with the biggest fall in China.

The world production figure is reduced by 292,000 metric tons. An increase for India was more than offset by large reductions for the United States and Brazil. Consumption is also lower, mainly owing to a downward adjustment for India.

For 2014-15, the net addition to world stocks has been lowered very modestly, to 1,899,000 metric tons,
resulting from a reduction to global output which was not quite offset by lower consumption. 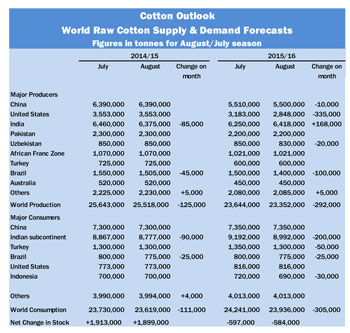