The origins of the man-made fiber (MMF) industry are found in the first commercial production of artificial silk using cellulosics by De Chardonnet in France in 1892. Regrettably the business declared bankruptcy in 1894! However, not to be discouraged, the industry continued to develop other cellulosics and acetates until the arrival of nylon, which was discovered by Wallace Carothers at DuPont in the 1930s. His discovery brought the first truly MMF to the market. Initial applications including military uses during World War II and replacing silk in women’s hosiery. Nylon was followed by the ICI development of polyester, discovered in the early 1940s by two British scientists working for Calico Printers.

From these early beginnings the MMF industry was born, and through continuous development it recorded demand in 2014 of 55.2 million tons (122 billion pounds) of synthetic fiber, in addition to man-made cellulosic fiber demand of 5.2 million tons. The natural fiber industry, including cotton and wool, has a demand of 25.4 million tons.

Figure 1 shows the history of fiber demand in millions of tons, and demonstrates the dominant role that polyester has had in fiber demand growth. The graph also shows the continuing dominance of polyester going forward, as calculated by England-based PCI Fibres in its forecast out to 2030. Polyester demand passed that of cotton in 2002, and has continued to grow at a significantly faster rate than all other fiber types. 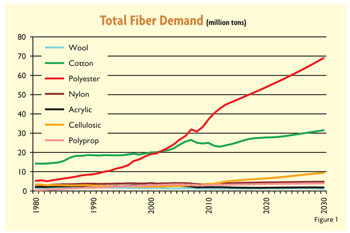 In 1980, polyester demand was only 5.2 million tons globally and by 2000, it had reached 19.2 million tons. In 2014, demand is put at 46.1 million tons. Looking at the period from 1980-2014, total fiber demand growth has been 55.7 million tons — 73.4 percent of which is down to polyester. The message is clear that polyester has gained significant share from all other fibers, both man-made and natural, and that anyone in the fiber business has to be aware that polyester producers are constantly looking at other fibers and their markets to determine if polyester can take further market share.

Polyester is dominant, but nylon, the oldest MMF, still plays an important role in the fiber business with 4 million tons of global production in 2014. Production is more broadly based by regions than for polyester, and the China, India, Southeast Asia group accounts only for 52 percent of total nylon fiber, with the Americas contributing 20 percent. Nylon has developed into a niche fiber, in that it is focused on a limited number of end uses, but some of these are quite large markets. Carpet is a significant application for nylon and accounts for 17.5 percent of total usage globally and 72 percent of North American nylon production. Other applications where nylon is very successful include airbags, heavy-duty tires, cap ply for radial tires, intimate apparel, sheer hosiery and swimwear. However, the nylon industry has to be aware that polyester is threatening a number of these markets. There has been remarkable growth in polyester bulk continuous filament (BCF) for carpet in North America. Polyester also is now making inroads into the airbag market — particularly for the larger curtain air bags.

Cellulosics have been a surprising success story over the past 10 years, primarily through gains in usage of viscose rayon staple fiber as both spinning fiber for apparel and in nonwoven end uses. Following a steady decline in market share and volume from 1980 to 2000, cellulosics made a remarkable recovery doubling consumption in the last 10 years to 5.2 million tons. Much of this increased demand has come from China where cellulosic staple mill consumption in 2000 totaled 0.6 million tons, and in 2014 totaled 3.0 million tons. Rayon staple received a significant boost in demand in 2010-11 as a result of the high price of cotton. Rayon provided a lower cost substitute for higher-priced cotton and the fiber has held on to its market share gain.

Forecasting
PCI Fibres provides forecasts of production and mill consumption in its annual World Synthetic Fibres Supply/Demand Report (Red Book). In developing these forecasts it is important to look at regional patterns of consumption at the final consumer level. Consumer demand ultimately drives production and mill consumption. In the 2013 Red Book, it was determined that in 2014 the world final consumer demand for all fibers averages 11.4 kilograms per capita (kg/capita) (See Figure 2). Volumes vary from North America with a high of 37 kg/capita; to Africa, the Middle East and India at 5 kg/capita. In taking the data forward as a forecast to 2030, it is necessary to look at global demographics where there is a significant shift taking place in the relatively near future. China has been the most populous country in the world, but following the single child policy introduced in the 1970s the rate of population growth has contracted significantly, and even as China relaxes its policy, it can be seen that the growing middle class generation is not returning to the multi-children family structure of previous generations. As a result, in the next 12 years India will overtake China as the largest population country in the world. This shift in demographics also is significant because as the average age of the Chinese population increases dramatically, buying patterns are changing. In 2000, the 15-34 year old demographic represented 35 percent of the population, whereas in 2030, the same demographic is forecast to represent 23 percent of the population. The 65 plus group represented 7 percent in 2000 and is forecast to represent 17 percent in 2030. Buying patterns could well shift from fast fashion to comfort and senior care. 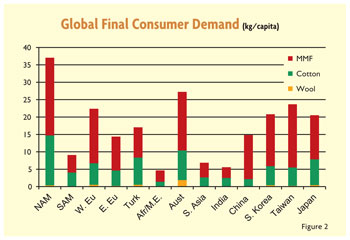 In contrast, the Indian demographic changes only slightly with the 30 and under group growing in absolute numbers, but losing share of the total population as life expectancy increases.

North America
MMF mill consumption in North America — the United States and Canada — peaked in 1999 at a total of 4.7 million tons. The acceptance of China into the World Trade Organization in 2001 and the increased global structure of the supply chain using MMF led to a severe decline in mill consumption in North America, which reached a low in the recession year 2009 at 3 million tons. Slow recovery from this point has seen growth to an estimated 3.25 million tons in 2014, according to the latest PCI Fibres Red Book.

The dominant application for MMF in the region is carpet and rugs. Nylon, polyester and polypropylene all see significant volumes consumed in this sector. It is also an industry sector which, as carpet rather than rugs, is relatively unaffected by import competition. In 2005, the carpet and rug industry in the United States reached a MMF consumption peak level of 1.62 million tons. It is reckoned that total MMF consumption into this sector in 2014 will slightly exceed 1 million tons. The potential for solid growth has been expected over the past three years as the economy has generally improved, but the housing market remains stubbornly depressed. The carpet industry has anticipated a return to better times and invested heavily in changing its product mix, with an increasing focus on filament yarns, polyester seeing most of the investment. Capacity for BCF in polyester, including polytrimethylene terephthalate (PTT), has grown from 85,000 tons in 2008 to a forecast 400,000 tons in 2015. As polyester BCF has gained market share, nylon and polyester staple as well as polypropylene BCF have all lost market share. Since 2005, the share of nylon staple into carpet has dropped from 16 percent to less than 1 percent, and polypropylene BCF has dropped from 24 to 10 percent, while polyester BCF has increased from 3 to 36 percent (See Figure 3). 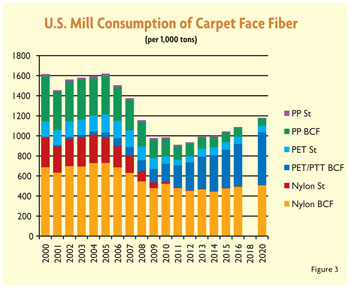 Carpet is not the only sector that has made investments. There are a number of nonwoven expansions and investments, as well as announcements of increases in polyester staple capacity. Perhaps the most surprising development is the level of investment in cotton and blended fiber spinning with eight new or expanded plants with a total investment of more than $800 million.

At the time of the TW Innovation Forum, the potential impact of increased oil production from innovative drilling techniques was discussed with the possibility of lower oil prices and therefore cheaper raw materials for MMFs. The speed and the scale of price reductions has taken the industry by surprise, and 2015 holds the promise that MMFs will be at a lower average price level than in 2014.

Alasdair Carmichael is president: Americas, PCI Fibres. The article is based on Carmichael’s presentation given at the 2014 Textile World Innovation Forum.