BIRKENHEAD, England — February 21, 2014 — Cotton Outlook forecasts world raw cotton production in 2014/15 at 25,222,000 tonnes, only modestly higher than the estimate for 2013/14. Lower production anticipated in China and Australia has been more than offset by higher figures for various countries, including the United States and Brazil.

World consumption is forecast to rise by 2 percent, to just under 24,000,000 tonnes, with the result that, like USDA and ICAC, Cotton Outlook anticipates that 2014/15 will be the fifth consecutive season to show a rise in world stocks.

Full details of Cotlook’s figures for this season and next are published in this week’s edition of the weekly Cotton Outlook magazine. For details of how to subscribe please visit www.cotlook.com, or email subscriptions@cotlook.com. 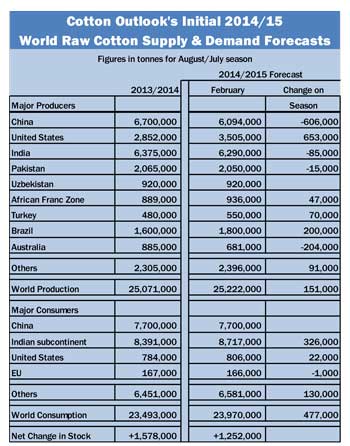