DSM, The Netherlands, has begun
construction on a new Dyneema® high-performance polyethylene fiber production line at its
Greenville, N.C., plant. The new line, which will cost tens of millions of dollars, is expected to
be fully functional by mid-2007. 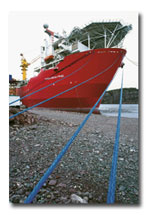 DSM is adding another production line at its Greenville, N.C., plant for Dyneema® fiber,
which may be used in mooring ropes for large vessels.

The plant’s expansion to four lines is the third such recent increase, bringing DSM’s total
fiber lines to nine. Strong demand coupled with a focus on supplying the US Army and law
enforcement agencies led to the decision, according to DSM.

“This additional investment fully
supports our growth and innovation strategy while contributing to improving the balance between our
sales by origin and by destination,” said Jan Zuidam, deputy chairman, DSM Managing
Board.