I
n
an early draft aimed at exposing the
risks of unfinished trade agreements with China,

Textile World
commented on the likelihood of a new reality of sinking certainty in the outcome of textile
and apparel quota negotiations between the United States and China.

According to sources at the time, both sides agreed to the need for short-term controls, but
true to form, the devil was in the details of defining a practical, substantive growth rate for
Chinese apparel exports to the United States.

Two scenarios appeared likely: First, no agreement would be reached — and no future talks
would be scheduled — and Washington would apply 7.5-percent annual growth caps on exports until
2008, when the specific quota restrictions agreed to by China to gain admission to the World Trade
Organization (WTO) would expire. This solution apparently was unappealing to both sides; but not
sufficiently so to withdraw the last proposal discussed, which offered a menu of growth rates,
dates and bases from which either side could choose.

A settlement has been reached, one relatively consistent with the parameters of the more
generous proposal previously noted incorporating the following features: Ten-percent increases in
apparel shipments and 12.5-percent increases for textiles for 2006. In 2007, rates settle at 12.5
percent in each category, except for fiberglass and thread, which will be allowed to grow at 15
percent annually. Changes in 2008 will include a 15-percent growth against eight products deemed
sensitive by US producers — cotton shirts and pants, bras and underwear. Four other categories —
thread, fiberglass, knit fabric and window blinds — will be allowed to grow 17 percent, with all
other categories limited to 16 percent. The offset has China agreeing to increase the categories
covered up to 34 and, most importantly, agreeing to extend the pact through 2008, a year overlap,
with said caps originally scheduled to evaporate in that year.

With talks settled, industry watchers need to express greater vigilance. A year ago,

TW
published 2002 data about the levels of consumption in Asian mills
(See “
An
Asian Irony,”
TW, November 2004). Information has been updated through 2003, and a 2004
forecast added. This exercise was begun with a search for changes in consumption by India’s growing
and well-managed fabric industries, and with the hypothesis that recent announcements from Indian
government and private sources projected major expansions in man-made fiber and fabric production.
It did not take long for the study to become complicated by United States/China/WTO negotiations,
leading to the analysis presented here. 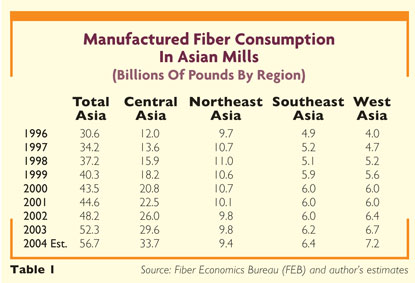 Table 1 details mill consumption of
manufactured fibers — cellulosics plus man-mades — in the larger Asian area from 1996 through a
2004 forecast by the author. By way of identification, the regions are delineated as follows: 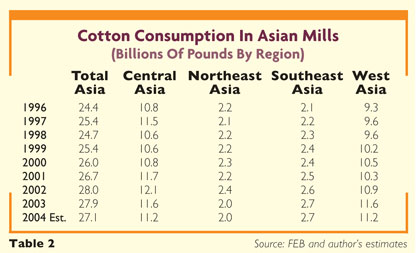 As shown in the table, growth of fiber consumption in all of Asia continues at an almost
double-digit rate, virtually doubling in the 1996-2004 period. As reported last year, the Central
Asian region leads the parade, consuming almost 60 percent of the manufactured fibers consumed in
all of Asia. Further, Central Asian mills account for 11-plus billion pounds, or 41-plus percent,
of the total Asian consumption of 27 billion pounds
(See Table 2). Together, Central Asian mills consume almost 45 billion pounds of the total
83-plus billion pounds of manufactured fibers plus cotton
(See Table 3). 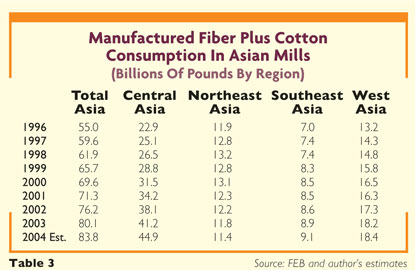 Continuing the geographic tour, as the post-World War II manufacturing economies of
Northeast Asia are replaced by service and banking economic models, manufactured fiber use among
Northeast Asian mills has stagnated, with indications that further contraction will occur in the
future. Japan continues to unravel its fiber, fabric and apparel complex, remaining industry-active
by providing increasing amounts of capital for other Asian regions’ use in growing from undeveloped
to developing nations.

Southeast Asia is made up of several troubled nations, and its performance in the fiber
economy demonstrates this. Weak economies and questionable governments have bred a lack of access
to world capital, and the area has missed opportunities to employ hordes of economically distressed
workers.

Given the speed with which world fiber markets are changing and growing, it is unlikely that
manufacturers in this area can revise policies and practices and join the capital race from
labor-sensitive to capital-sensitive economies. Considering these countries have existed this long
without the fiber industry, it is fair to conclude their agriculture and chemical industries are
aimed at other basic industries, leaving the textile complex battle to other participants.

In a move akin to the formation of
the Ministry of International Trade and Industry’s Japan Inc. to guide Japanese industrial growth
after World War II, India has formed several industry/government consortia to provide similar
leadership. India government programs, together with several major product and brand expansions by
Reliance Industries, have led to the Indian presence being felt increasingly in world markets. The
country faces a birth rate that ensures India will house a population larger than China’s within a
decade. With educational access and achievement limited to the few, India appears determined to
structure its economy to offer employment to the entry-level masses in industries such as textiles
and apparel that will generate trade dollars.

Government programs, reinforced by the actions of Reliance Industries, point to increased
investment in man-made fibers followed by increased exports to the developed world. Ah, the cycle
repeats, although with an unlikely partner.

Where Will It Lead?

What path will apparel imports take
over the next few years? If it’s possible to negotiate equitable import quotas and duties, will the
US textile industry use the breathing room to restructure/remodel/ refinance/redevelop to enhance
its competitive/productivity stance and be ready to compete in a world market?

Based on the situation, it doesn’t look hopeful. Based upon the recent settlement, another
look at China and a more careful appraisal of India, which just may be settling in as a long-time
rival, are needed. After all, if India could last through several centuries of British
rule-fomented confiscatory trade policies, what’s a few years more in a trade war with China over
dominance of international textile trade?

Author’s Note: To simplify graphs and tables, the usage of wool, olefin and miscellaneous
fibers in this analysis has been omitted. For reference, wool consumption totals approximately 1
billion pounds annually across the total Asian region, and olefin does not directly impact the
import/negotiations theme of this article.