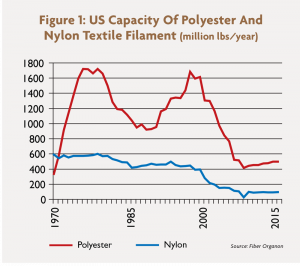 From its beginnings as the TYAA in 1972, SYFA has adapted to weather downturns in the industry and is celebrating its 50th anniversary this year.

The Synthetic Yarn & Fabric Association (SYFA) and its predecessor organization the Textured Yarn Association of America (TYAA) is celebrating 50 years of operation in 2022. The TYAA was first formed in 1971 and held its inaugural meeting in 1972.

This time period was the dawn of draw texturing and the commercial arrival of polyester textile filament as a feed yarn for draw texturing. Prior to the beginning of the 70s, nylon was the main textured fiber using fully drawn yarn as the supply.

Polyester was developed in the 1940s, and the initial focus was on producing a staple fiber to either complement cotton in blended yarn or to compete with cotton. Filament polyester remained a smaller volume than polyester staple globally until 1993, but by 2020 had grown to be more than double the size of staple.

The growth of texturing and particularly polyester brought a number of new producers into the U.S. market and resulted in industry leaders, led by Norman Cohen of Goulston Technologies Inc., Monroe, N.C., deciding that the sector was large enough, and unique enough, to warrant its own technical trade association. The author of this article joined the U.S. texturing industry in spring 1972 and had the privilege to attend the second full meeting of the TYAA in summer 1973.

The Growth Of Texturing

A major driver of the growth in texturing in the United States and elsewhere was the development of draw texturing which took four process steps and combined them into two steps, as well as increasing productivity and producing a larger, better package of yarn for direct knitting or weaving.

There was no shortage of technical developments to be discussed at the TYAA conferences!

In the mid to late 1970s, there were approximately 115 companies in the United States with texturing or draw texturing machines. At this time, the structure of the industry was driven by growth. There were a number of large fabric companies that diversified their production to include texturing. Additionally, some of the large polyester fiber producers also invested in texturing. There also were many specialized yarn companies with texturing operations. The double knit industry provided an apparently insatiable appetite for more and more textured polyester, until the inevitable happened and demand collapsed.

Figure 1 shows data from the American Fiber Manufacturing Association (AFMA) publication Fiber Organon. Polyester textile filament capacity in the United States grew from 316 million pounds in 1970 to 1.7 billion pounds by 1979, with the growth driven mainly by demand for textured polyester. The 1979 peak was the highest level the U.S. industry ever achieved. The 1980s were a time of consolidation and closures within the industry, as well as a time for product development and production technology improvements which resulted in a good recovery in the 1990s. 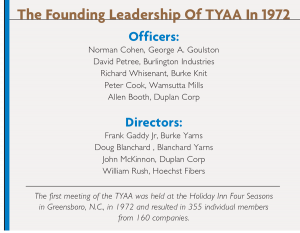 However, the good times for the domestic industry came to an end as the calendar turned into the 21st century and global supply chains became the prevalent business model. Many sectors of the textile industry were hit very hard by global sourcing and the textured yarn industry was no exception. The chart tracks the downturn very clearly.

The TYAA was faced with a rapidly declining pool of membership. From approximately 115 companies with texturing machines in the late 1970s, by 2006 there were only 17 companies remaining.

The rebranding has been a success with both membership and attendance at conferences seeing significant growth in the years following the decision.

Two association milestones stand out. The first is an awareness of the importance of sustainability to the industry and, from the beginning of the association’s rebranding process, it has made a conscious effort to include presentations on sustainability at all its meetings. The most successful meeting in association history was the 2008 Winter Conference when the entire program was devoted to sustainability under the theme “Sustainable is Attainable.” That meeting saw a record attendance of more than 300 people.

The second milestone is more recent, and that was the ability to come through the COVID-19 pandemic and be in position to look ahead to a bright future.

The association is celebrating 34 years as TYAA and 16 years as SYFA for a total of 50 years of serving the U.S. synthetic textiles industry. Please join SYFA in celebrating this milestone at the fall conference to be held November 3-4, 2022, in Charlotte, N.C. For more information about this special event, please see, “50 Years Of SYFA,” TW, this issue.